A selection of log book entries regarding ZE360 flights.

(Please click on the text for an enlarged version)

With thanks to Bill Preece for the following Abbreviations Key: 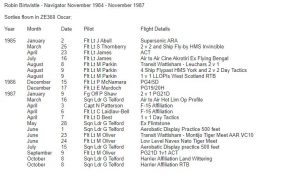 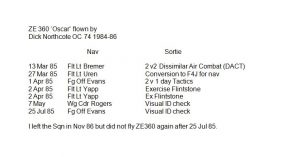 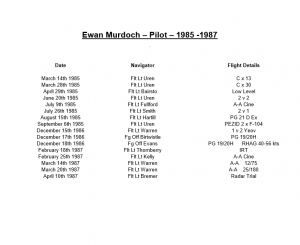 Very surreal sitting in one of our Motels in Dunedin, New Zealand, in ‘light’ lock down, and seeing on Facebook the pictures provided by Haley of ZE360 flying in the Dolomites on the Italian-side (most of the time) on detachment with 21 Gruppo at IAF Cameri in early September 1985. As part of the recovery of ZE360 and the intent to commemorate Ewan and Jerry, Tony Clay asked me to interpret the missions Ewan flew in ZE360 period 1985-87. Here goes….

Tony supplied a synopsis of those 16 missions with navigators (and one pilot) various from 74 Squadron. My investigation depended on my own logbook and delving in to the history around those dates so as to interpret the nature of those missions; Ewan appeared to have a coding system likely recognisable to pilots but, for myself, my log book is more descriptive. But I’ll have a go, in the context of where we all were in our training and work-up-to-combat-ready status (Jan-Sept 85), and operational flying through to August 1987. For sure Flt Lt Ewan Murdoch, Flt Lt Mike Castle, Fg Off Mark Oliver, Fg Off Mike Evans and myself (the majority of 64 course at 228OCU) arrived at 74 Squadron on 28 January 1985 to meet this immediately impressive clean-lined aircraft – the F4J(UK) – and equally impressive American-flying suited Tiger Squadron aircrew members bristling with experience and very sharp teeth keen to consume the fresh ‘meat’ that had just arrived. In my memory ‘daunting’ does not suffice to describe my own sense of that arrival on our first Squadron … and the illusion of there being five of us, strength in numbers, counted for nothing.

The first seven missions Ewan flew in ZE360 (and on the Squadron) were likely part of his work-up to Combat Ready status (I guess completed around August to September 1985). Certainly March 1985 missions with Jerry Uren (who I believe took the pictures of ZE360 in September 1985 described above).

March 1985 – C x 13 and C x 30 were likely intercept mission at medium or high level, and likely supersonic intercepts as my own logbook reflects lots of those missions – maybe I wasn’t very good at them or it was a large part of the work-up syllabus? No recording cameras in the F4J(UK) … or two stickers as I remember??

9 July – with Pecky Fulford – we were in Cyprus for APC so the A-A Cine is likely Air-to-Air Gunnery no live firing or the description Cine did not apply to F4J as discussed. Ewan would have fired live after that but not, in this instance, in ZE360.

15 August – we had just completed a bolt-hole to RAF Honington in early August and the mission appears an Exercise mission; Ewan would have been approaching, if not already was, ‘operational’.

6 September – Ewan and I were certainly in Cameri and my mission on the same day states “LL Overland (Dolomites – NE) 2xF104, 2xF4J”. The suggested photos of ZE360 were, I’m guessing, Gordie James and myself flying ZE360 on 10 September – logbook reads: “LL Overland. Photochase Dolomites. 2xF104 2xF4J”. My guess is Ewan and Jerry were the photographers and more pictures exist?

December 1986; then a very big jump before Ewan flew ZE360 again? In my own log book I, too, have no record of ZE360 missions – not one – so maybe Oscar had joined Whiskey as the Squadron Christmas trees? December 1986 missions – personally I was just back from 5 weeks in the Falklands on the FGR2 but we were supporting D School in Yeovilton, TASMO and, again, multitude of mission profiles in those four days, as well as night flying for currency before Christmas?

18 December: RHAG would have been arrestor cable engagement by Ewan at 40-56 knots, and I would note Mike Castle and myself flew ZE360 on the same day…ours was a long ECM sortie against Canberra (chaff and jamming), a VID against a Norwegian C-130 and a practise diversion to Bentwaters? Quiet day at the office…?

18 February – a day of dread for Ewan – Instrument Rating Test with Stu Thornberry.

25 February – Air-to-Air Gunnery Cine – this seems strange as we did not deploy to Cyprus until March so maybe a dry run in the UK? QWIN Ned Kelly was master of proceedings…

14 and 20 March – Ewan was firing live in ZE360 and, from 75 bullets on 14 March achieved 12 hits against the flag, and 25 from 180 fired on 20 March. All about the percentages so the QWIs would have us believe but I think Ewan would have said one bullet would suffice through the canopy of the opposition…

10 April with Grant Bremer – states Radar Trial – that might not have been a radar trial specific to the F4J but in support for the ‘Blue Circle’ version of the Tornado ADV? Ewan would have been preparing for his stint in the Falklands at this point.

Hopefully that reflects some elements of Ewan flying ZE360; I would say she did not feature in many of my log book entries either relative to my total flying on 74 Squadron and someone may shed a light on why?

I only flew with Ewan … genuinely a great pilot and a pleasure to fly with … on thirteen occasions but a pair (transits there-and-back) I still reflect on to friends as a measure of my life in the RAF and on 74 Squadron. The Boss and our Execs sent Ewan and I on a mini-Tiger Meet to 11 Staffel, Dubbendorf, Switzerland, in October 1986 in XE364 ‘Zulu?’! Just Ewan and I we parked at CAF Solligen (Baden-Baden) so presumably avoiding starting WWIII. What on earth were the Boss and Execs thinking to let us two go off to Southern Germany and Switzerland with a relatively fresh F4J? Twenty or so aircrew from around NATO being entertained, fed and watered like gods by the Swiss Tiger Squadron. Amazing hospitality enjoyed with a long lost friend; I had nothing whatsoever to do with Ewan’s “flight departure profile” from CAF Solligen to end festivities…if that investigation is still ongoing nearly 34 years later…?

(With many thanks to Andy Nailard for supply this narrative and explanation). 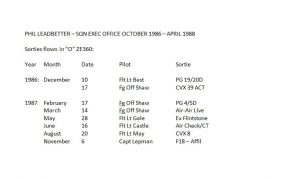 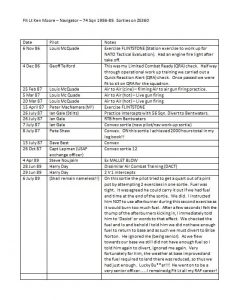 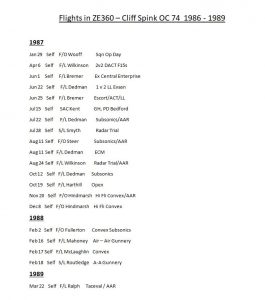 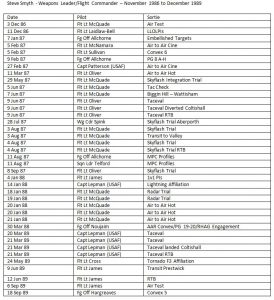 Steve also recalled the following in ZE360…….
`I recall Louis McQuade and I returning from Biggin Hill on Sunday 7 June 87.
Louis decided to give the jet an altitude test (it was a quiet Sunday) – we got to 64,000 feet before the engines started to wobble a little.  Completely daft and not within the release to service. My dear friend Louis has departed this life and I am long retired from the RAF (and I live in Wellington NZ) so I doubt if they can court martial us retrospectively!`
Lets hope not Steve!
Martin Loveridge      Navigator       1988-1992
Sqn Ldr on 74 (OC B-Flight) 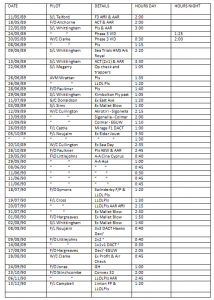 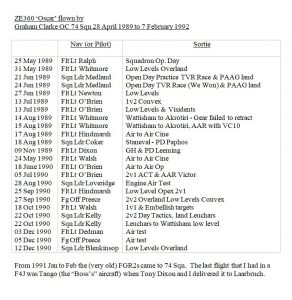 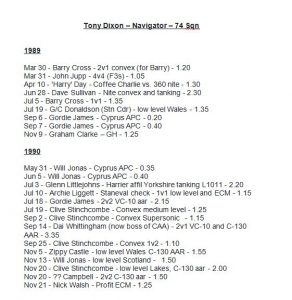 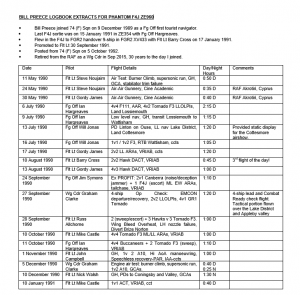 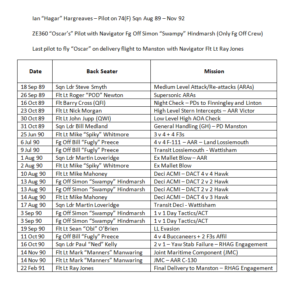