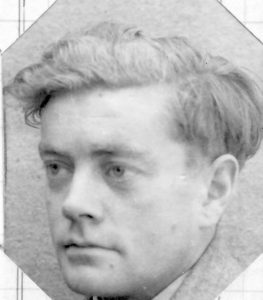 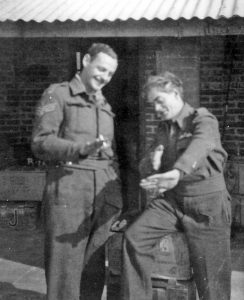 It is with sadness that we have to report the death of one of our few remaining World War II pilots. Brian ‘Titch’ Harris died on 28thMarch.  He served in the RAF from 1940-1945, completing his flying training in the States before joining 74 as a Flight Sergeant. He was with 74 from 1942-1944, throughout their time in the Middle East and post D-Day in Europe.  He was commissioned and with the rank of Flight Lieutenant was posted to RAF Stanmore Park as Camp Commandant. He completed his RAF service at No. 4 Maintenance Unit at Ruislip.

Brian had many eventful moments whilst flying with the Tigers. Whilst based at El Daba he took part in a 100 aircraft raid on Crete on 22nd July 1943, as one of fourteen participating squadrons, 74 contributing six aircraft which were fitted with long-range tanks. The 100 aircraft were formed into three Wings, 74 being part of the Sidi Barrani Wing. Each aircraft had fifteen minutes over Crete during which time they sought out briefed targets as well as targets of opportunity. The mission wasn’t a success for in common with the other participants 74 had problems finding the targets and were loath to attack anything other than obvious military installations for fear of injuring civilians. If the object of the exercise was to create pandemonium on Crete for a few minutes it certainly succeeded, but returning to land in a sandstorm after their 550 mile, four hour excursion all the six Tigers really had to show for their efforts was a sore backside!

During the early morning of 3rd October 1943 a German invasion fleet approached the Dodecanese island of Cos and landed 1,500 troops and equipment that included armoured cars. Ju88s gave airborne protection to the fleet. 74 had a few aircraft based on the island at Antimachea as part of the inadequate defence force. With the German’s arrival, ground and aircrew found themselves on the front line – literally. Titch was one the pilots and his colleague Guy de Pass recounted what happened.

“We were woken at 0430 and rushed out of our tents and saw Germans coming up the beaches three or four hundred yards away. Titch, David Maxwell and I ran off in the general direction of the road. The Germans were spraying the area with machine gun fire. There was little we could do except run and I don’t think we have ever run so fast in our lives. We grabbed our few belongings and made for a jeep driven by a South African. The Germans managed one burst at us and we dropped our bundles as we ran but we did all manage to hang on to our logbooks. The firing was becoming more persistent, flares were being fired and mortar fire could be heard. It was still fairly dark. We joined up with two more of our pilots and headed straight for Cos Town. There was little we could have achieved by staying as the landing ground was out of action. We reckoned the best policy therefore was to try and find other British troops.”

When they reached Cos Town the place was in a state of utter confusion. Realising the only course of action open to them now was to try and get off the island they moved down to the harbour, boarded an Italian boat and set off for Leros with shells exploding in the water all around them. En route they encountered enemy patrol boats and so altered course for Bodrum on the Turkish coast. From here they eventually reached Castelrosso where they found a high-speed launch to take them to Paphos and from there they flew by DC-3 to Nicosia where the rest of 74 Squadron, those that hadn’t been detached to Cos, were.

By the end of October, 74 were operating from North Africa again, having moved to Idku. On 13th November Titch suffered engine problems at 16,000 feet. Coming down to land his engine caught fire and he did well to make a near normal landing although the undercarriage collapsed shortly after touching down. Titch suffered slight burns but that didn’t keep him away from duty for very long.

We next find him back in England with the squadron as part of the Lympne Wing from where they flew offensive sorties over France and the Low Countries. On the 22nd May 1944, whilst participating in one of these operations, Titch hit a tree whilst strafing German traffic along a Belgian road just south of Brussels. He escaped with just cuts and bruises. His friend Allan Griffin remembers him later returning to the squadron.

“There was a story circulating that he had been captured after taking refuge in a supposed safe house in Brussels and being looked after by a most attractive young lady. But the lady was not averse to entertaining members of the local German garrison and when one appeared Titch would go and sit in the wardrobe and only come out after the German had departed!” That story is largely apocryphal however. In fact the family that took him in made a den for him underneath the floorboards in the bedroom, with the bed placed over the top, rather than him hiding in the wardrobe. The Gestapo knew that he was in the area and finally realised that he was being looked after by the family. They arrested the wife and daughter of the household and threatened to shoot them unless the master of the house gave Titch up. Hence his capture. He woke up one morning to find the Gestapo on both sides of his bed. “I thought I was having a bad dream,” he later recalled. “They tried to give me the third degree while I was still in bed but got nothing out of me so they hauled me out and took me to Brussels where I was thrown into a prison cell.” Titch was later able to escape and make his way back to England with the help of the local Resistance.

Brian Harris was born and brought up in Droitwich Spa, returning there after the war, spending time in Ronkswood hospital recovering from his ordeals. He was one of the first patients to be treated with penicillin.   In 1949 he married Pat, his wife for 63 years. He has two sons, a grandson and a granddaughter. Our condolences go to Pat and all the family.

He became heavily involved in the development of Droitwich Spa, becoming a town councillor and Mayor. He was also a district commissioner of the Boy Scouts and chair of the Droitwich Spa Town Development committee. At the same time Brian was instrumental in developing the family business, the provision of high quality nursing home facilities in Droitwich Spa.