Tiger at the Pole

Tiger at the Pole 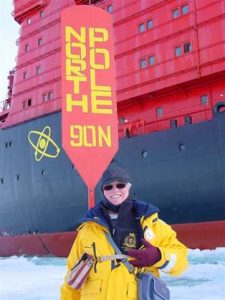 On July 2nd 2007 I became one of only about .0003% of the world’s population to have reached the geographic North Pole or 90 degrees north! There is little doubt I am the first ‘Tiger’ to have done so. Please excuse the brief exposure of my left breast in order for the photograph to be taken. You can be assured I did not suffer any frostbite as a result.

Why do we do these things? The old cliché `because it is there` could probably be applied, along with a spirit of adventure which I have had throughout my life.

Since I have also ventured to the Antarctic and Everest I think the only major challenge left would be a trip into space, so I may be contacting Richard Branson quite soon!

The geographic North Pole has been reached by many modes of transport including balloon, aircraft, dog sled, snowmobile, nuclear submarine, nuclear powered ship, ski and on foot. There is some debate as to who first reached the Pole on foot with claims from both Frederick Cook in 1907/1909 and Peary in 1908/1909. However science has discredited these claims. The first time the true 90 degrees north appears to have been reached was probably as late as 1977 although it is thought some Russian explorers may have achieved it prior to that.

The geographic North Pole is a mathematical point where the imaginary line of the earth’s axis of rotation passes through the earth’s surface. At that location the sun is seen to circle the horizon without setting for six months a year followed by twilight and then six months of darkness. At the exact location 90 degrees north there is in fact no time as such so it is possible to walk around the earth in a minute. I actually did this just to prove the point.

The Pole itself has no length, width or breadth and because the sea ice is constantly moving there can be no permanent flags, plaques or markers to indicate the spot. An adventurer has to locate the Pole by either celestial navigation (beyond me) or GPS satellite positioning, as indeed I did. It is not possible to reach the geographic North Pole by compass since the magnetic North Pole is also constantly moving and is currently about 550 miles from the geographic Pole.

Whereas the Antarctic is a frozen land mass surrounded by water the Arctic is an ocean, frozen to depths of up to nine metres.

Sadly I witnessed at first hand the effects of global warming – pools of water on the surface of the ice at the North Pole.

This was truly an unforgettable and privileged experience.