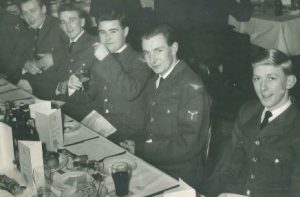 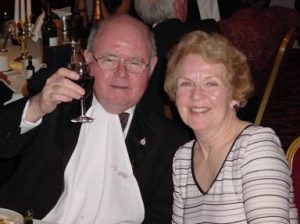 Sid Simpson and his wife Lesley have been ever present at 74 Squadron Reunions over the years and all those who have got to know them have been saddened by the news of Sid’s death in October after suffering a stroke.

Sid had been incapacitated by a previous stroke in August 1999 from which he made an amazing recovery in true Tiger style to be able to resume life and explore new avenues and acquire new skills. He may not have been as nimble as he had once been (he ran the Squadron football team at Tengah) but his mind became sharper than ever as he embraced new disciplines including  poetry, story writing and painting. When he died Sid was learning how to master his computer and the story of his and Lesley’s time in Singapore with the Tigers (see Tiger News)  was all written on his PC.

Sid was a charming individual with a ready smile, a fund of jokes and anecdotes galore. He was always planning new adventures – at one time his ambition was to walk the Inca Trail in Peru to raise money for the Stroke Association and he talked about it often although whether it was his doctor or his family who dissuaded him from being quite so ambitious I’m not sure! But that was the measure of the man that we in the Association always recognised – planning ahead, a determination not to be daunted by anything, pride in the squadron, proud of his colleagues from the Lightning era and always pleased to be  in their company.

Sid was with the Tigers between 1967 and 1969 as an airframe fitter on second line servicing and holding the rank of Corporal. His total RAF career spanned 22 years and when he retired  in May 1981 he was a Chief Technician. Other than 74 at Leuchars and  Tengah,  Sid was also with 23 Sqn at Leuchars, the TTS at Sylt (Germany), the MSU at Kinloss, 203 Sqn in Malta and on the line at Brize Norton.

Our thoughts are with Lesley and all the family.