Group Captain Sammy Hoare passed away in June 2007.  Nineteen year old Sammy arrived at Hornchurch and 74 Squadron on 4th September 1937 as a Pilot Officer in company with Don Thom, the two young pilots having just finished their training at Netheravon. He recalled later.. reporting to the squadron office where we were greeted by the Adjutant Tom Rowland who was very pleasant and began to tell me what a good squadron I was about to join. It was all very exciting for a youngster but I was disappointed when reaching the hangars to see mostly Gauntlets and a few Demons.

It would be 18 months before 74 received Spitfires. On 24th May 1940, during the fierce fighting over France, Sammy was forced to land at Calais-Marck when his aircraft was hit and began losing glycol.

Although our instructions were to patrol the Channel coastline we were told we could go inland if we were investigating any aircraft. I managed to collect a bullet from somewhere. It may have been a German infantryman or light flak or it may even have been from our troops on the ground. I was intending to go back to base but Mungo Park called me up and said I was streaming glycol. I thought the sensible thing to do was what Squadron Leader White had done the previous day – go into Calais Marck airfield.

Sqn Ldr White had been rescued from Calais Marck but Sammy was not so fortunate and after lying amongst the Calais sand dunes for thirty-six hours and trying unsuccessfully to get onto small boats he was picked up by an SS Panzer unit. He spent the next four years in POW camps, survived the war and finally left the RAF with the rank of Group Captain. 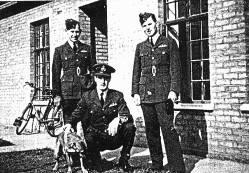 Taken sometime before April 1938 at Hornchurch – Sammy Hoare is on the left with Charlie Meares, Temple Harris and an unidentified dog.