The Gauntlet gave way to the Spitfire in February 1939 when Brookie Brooks flew the first example into Hornchurch for the squadron. Here we see him heading a photo shoot featuring the old and new aircraft type. Within the ranks are men who went on to fight with the Tigers during the Battle of Britain. 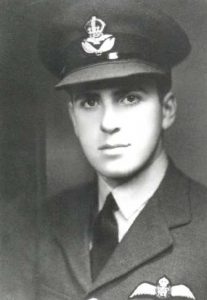 The Canadian Willie Nelson. After serving on Whitleys with 10 Sqn he volunteered for Fighter Command and after conversion to Spitfires was posted to 74 on 20th July 1940. Willie Nelson claimed a Bf109 on 11th August together with a BfllO and a 110 damaged: a Do17 on the 13th and further 109s on the 17th, 27th and 29th October. Nelson was killed on 1st November when he was shot down over Dover (in P7312). 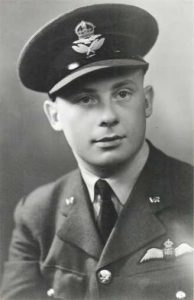 Pilot Officer Brian Draper was posted to 74 on 17th February 1940. He shared a Do17 over Dunkirk on 25th May and later in the year damaged a Do17 and Bf109 on 10th July.  In September Draper destroyed a Ju88 on the 14th together with a 109 (and a probable). On the 20th October he claimed another probable 109 but his aircraft was severely damaged in the dogfight and he crash landed but survived.  On 14th November he destroyed 3 Ju87s and damaged a 109, destroying another the following day. Brian Draper was awarded the DFC on 24th December 1940 and was posted to the CFS at Upavon a few days later. 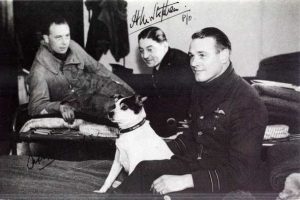 HM Stephen was awarded the DFC on 27th August 1940, a bar to the DFC on November 15th and the DSO on 24th December. He was then posted to 59 OTU at Turnhouse.

The name of Adolph Gysbert Malan is synonymous with the Battle of Britain and air combat. We have a significant number of Association members who remember Sailor and the interesting thing is they remember him for different reasons. His combat record speaks for itself.

Combat information from ‘Men of the Battle of Britain’ by Kenneth G Wynn. CCB Associates. 1999

November 1940 and the 600th enemy aircraft destroyed by aircraft flying with the Biggin Hill wing is claimed as a shared victory by H M Stephen and John Mungo Park (in the cockpit). Mungo Park’s war record with 74 reads as follows :

Combat information from Men of the Battle of Britain by Kenneth G Wynn. CCB Associates. 1999

The Squadron ZP code is prominent in this shot of Pilot Officer Sandman with ‘his’ Spitfire. Sandman was posted missing on the sortie in May 1941 during which the Tigers CO Mungo Park was shot down and killed. Sandman was more fortunate – he was captured and made a POW. 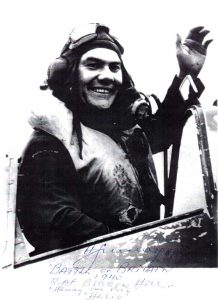 Henry Szezesny was one of the Poles who flew with the Squadron from Biggin Hill during 1940. He and his Polish colleague Brzezina were christened Sneezy and Breezy by the Tigers as they found their real names unpronounceable . 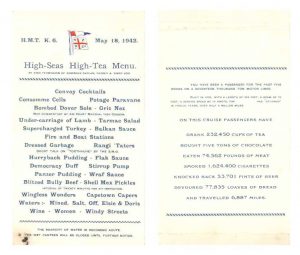 Humour was never very far below the surface even in less than ideal conditions such as the uncomfortable transit to South Africa from the UK when the squadron was transferred to the Middle East in 1942. The SS Rangitata was actually a New Zealand refrigerator vessel pressed into service as a troopship for the duration of the war. The ‘menu’ reflects the humour of the time. 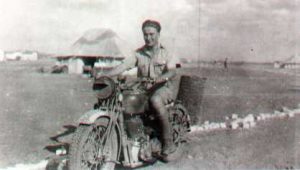 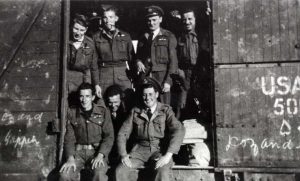 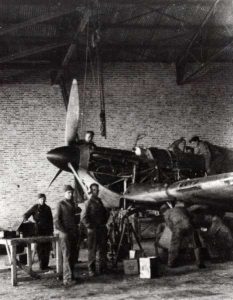 When the Tigers had finally reached the Middle East they found themselves without a home and without aircraft (the ship carrying them had been sunk). One of their early ports of call had been Ramat David where Clem Owen soon found an ideal way of getting around on the camp. This airfield was home to an American Liberator squadron and 74’s engineers became involved in servicing, maintaining and arming these heavy bombers pending arrival of their own aircraft.

For a few months the Tiger’s wandered from airfield to airfield before finally settling in December 1942 at Meherebad (now Teheran International Airport) where a batch of second hand and well used Hurricane IIbs were taken on charge. Not reliable aircraft by the time they reached 74, a situation exacerbated by conditions in the Middle East, they were nevertheless a welcome means of flying until better equipment came along. This Hurricane undergoes maintenance in the field.

Modes of transport in the Middle East varied considerably although none of it could be considered luxury class! Where there was a railway line, railway trucks were impressed – as here. Amongst the happy band in this shot are Allan Griffin (back left, standing), Tony Reeves (second from right, standing) and Frank Twitchett (front right, sitting).  Under ‘Spud’ Hayter, 74’s Ousting the Gremlin parties became legendary and any opportunity was sought to hold them. As can be seen, the opening of the new Mess at Shaibah gave the perfect opportunity. 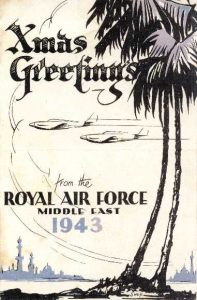 Christmas 1943. The Squadron is at Idku in the Western Desert and festivities are held in the traditional way including a much anticipated Xmas lunch with all the trimmings… 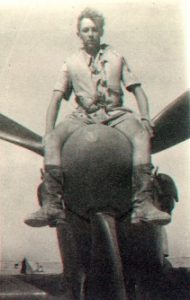 Landing Ground 106, Idku – and the squadron have by now re-equipped with Spitfire Vs. Bill Alston gets a close look at prop and spinner. 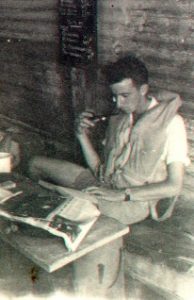 The board shows a date of 29th July 1943 which suggests this photo of Willie Wilson on readiness was taken at El Daba on the North African coast. 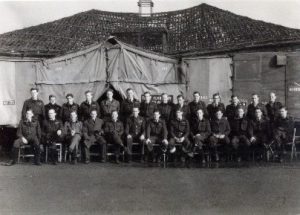 74 returned to the UK just prior to D Day and then, after Overlord, followed in the wake of the advancing Allied armies into France and beyond with bases at Sommervieux, Bernay, Gamache, Lille, Courtrai, Antwerp-Duerne, Schijndel and, finally, Drope. Squadron members aware of 74’s history would have recognised some of these places as their stamping ground during the First World War as well. Here, the squadron gathers in front of the camouflaged Wing Ops ‘complex’ at Courtrai in September 1944. 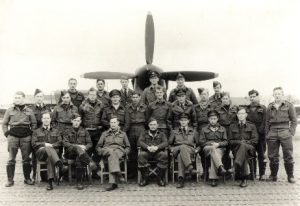 Schijndel, Holland, March 1945. Tony Reeves, in the centre of the front row, was CO at this time. Note the PSP used to create a stable surface for operations. The aircraft is a Spitfire XIV and the place Schijndel again. Tony Reeves headed the Squadron as CO for the first five months of 1945, having been a Tiger since the Middle East days. There are several current Association members in the photo including Johnnie Johnstone, John Bennett and Paddy Dalzell amongst them.

For a while 74 Sqn operated as part of 145 Cross of Lorraine Wing in Europe alongside three French squadrons. Pressed into use as a chapel by the Wing was a section of converted DC3 fuselage mounted on a lorry chassis which could then follow the squadrons around.