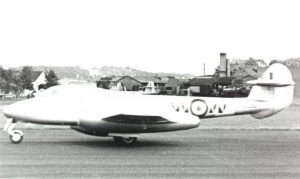 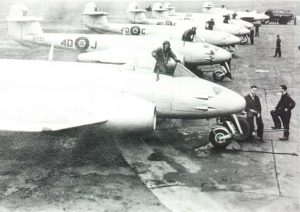 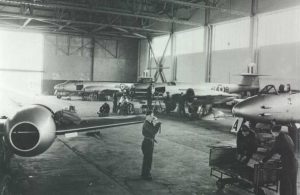 74 arrived at RAF Horsham St Faith on 14th August 1946 with the Meteor F3 which they flew until March 1948 when they exchanged this mark of Meteor for the F4. The F8 arrived in October 1950 and these remained on charge until March 1957 and the arrival of the Hunter. WL 380 was a T7 which flew alongside the F8s. This line up of Meteor F4s includes VT133, VT 192 and RA439. A tiger’ s head
can just be made out on the nose of the aircraft. Given that the 4D codes were discontinued in 195 1, these must be some of the first Meteor F8s that the Squadron received. 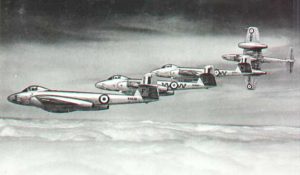 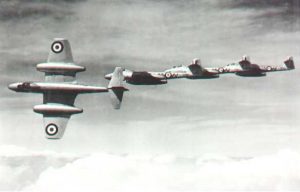 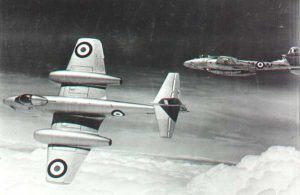 74 flew several successful aerobatic teams with the Meteor. Can any Association member confirm the date of this one? 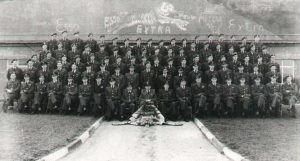 The likelihood of 74 and 245 Squadrons coexisting peacefully side by side as part of the Horsham Wing was remote! There was little doubt as to which was 74′ s hangar, what with the leaping tiger et al……but inevitably this was a prime target and in this photo of c. 1953 the handiwork of 245 can be clearly seen behind the ranks with the tiger ‘meowing’ and liberal references to Esso Extra! 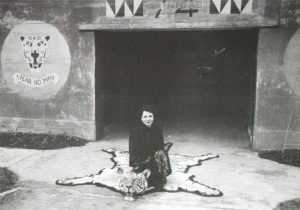 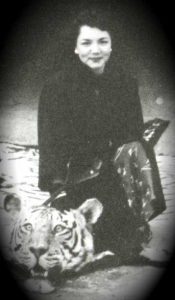 One of the perks of being labelled Trinidad Squadron during the war years and into the 1950s (apart from the annual gift of a keg of Trinidadian rum from the West India Committee) was a visit from Peggy Dick, Miss Trinidad herself. She made a graceful addition to the Squadron’ s tiger skin at Horsham St Faith in June 1953. 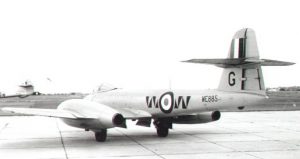 Records show that WE885/G served with the Tigers throughout its service life and was scrapped after being withdrawn from use with 74 in April 1959. This is a particularly pleasing rear three quarter view of the classic Gloster design. 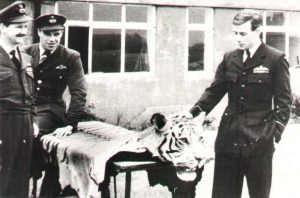 Tiger skins have naturally always been a feature of the squadron’ s crew rooms and this one was still on display at RAF Valley in 2000 prior to the disbandment. Correspondence exists detailing the provenance of this creature as a gift from India.

Meteors gave way to Hunters in March 1957 with the F4 and then the F6 very shortly afterwards. The Meteor had by this time become a tired old aeroplane and their replacement was very welcome.  Hunter F6 XK141/F was allocated to Ian Cadwallader who was tasked with designing the stencils for the application of the tiger to the nose of each aircraft. XE610/J. Camouflage of the Hunter was dark green and medium sea grey with silver undersurfaces and white wing tips. A few of the aircraft carried a facsimile of Sailor Malan’ s signature in black beside the tiger’ s head.  Also, recently added, a colour photograph of the last Hunter flown by Ian Cadwallader the day before he left the RAF on the 25th of March 1959. 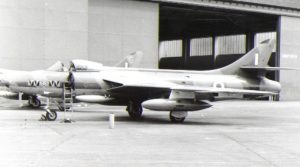 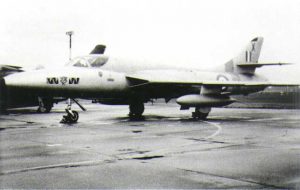 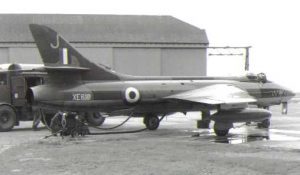 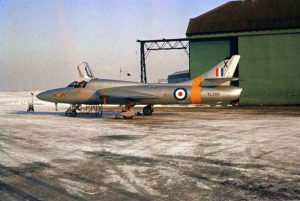 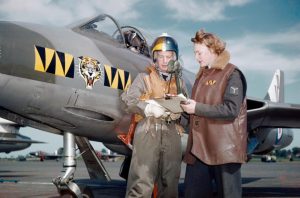 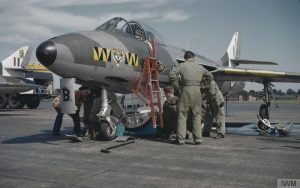 In 1958 the Squadron was placed on alert for transfer overseas as a result of increased tension in the Lebanon. They were on standby to fly to Cyprus as part of the RAF’s strategy of rapid reinforcement of its overseas bases. When they moved to Nicosia in September almost half the RAF’ s day fighter force was in the Middle East. 74 shared the flightline with other squadrons – here Hunters of 65 Sqn and an unidentified Meteor T7. Facilities at Nicosia for ground crew were crowded and basic – a tent encampment sprang up around the airfield. 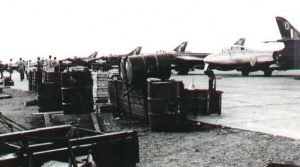 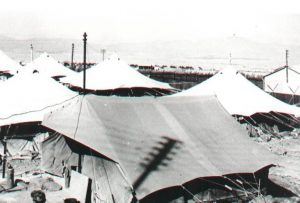