Sqn Ldr Peter Carr, who was the Tiger’s CO between 20th July 1959 and 22nd February 1960, has died aged 86. Peter will be familiar to many of us as, when he was able to, he attended reunions with his wife Edna. Particularly memorable was the 90th Anniversary reunion when he joined fellow Tiger COs Graham Clarke, Dick Northcote, John Howe and Cliff Spink. The photo shows Peter in the centre with the Malan Memorial Sword.* 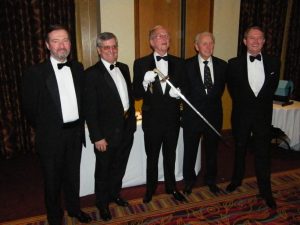 Peter was born in March 1925 in Twickenham, the youngest of three sons. A mischievous boy (mischievousness is something that never left him) he became a member of Hampton Court chapel choir and then, having passed his 11 plus, he attended Hampton Court Grammar School. At 16 he first met his future wife, Edna. By this time he was a member of the Air Training Corps after which he joined the RAF, soon gaining his pilot’s Wings. He subsequently proved himself to be a fighter pilot of exceptional ability and considerable bravery. This, and his devotion to duty, was officially endorsed when he was awarded the Air Force Cross (although Peter always maintained he found the medal in a packet of cornflakes!). In 1954 he was posted to the USA as an exchange pilot where, amongst other types, he flew the F-86 Sabre and F-100 Super Sabre.* 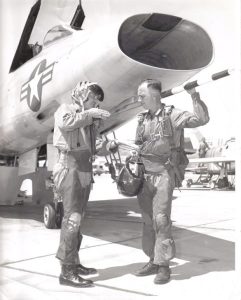 It was whilst in the States that he first met Donald Campbell who was to eventually to entice Peter out of the RAF in 1960 to be his Project Manager and Reserve Driver on the Bluebird Land Speed Record attempt. By now he was a Squadron Leader and CO of the Tigers. The photograph shows him striding in from his last flight with 74* – and in fact his last flight in the RAF. His decision to leave was one which he frequently questioned afterwards, particularly when he found that Campbell was not an easy man to work with, that it was evident that the opportunity to drive Bluebird was increasingly less likely and that the payment of wages was erratic. With a family to support Peter decided he had to move on. He had made contacts within BP whilst in the States and he was invited to join them for a short while on the sales promotion side. Then he made the acquaintance of Irish millionaire John Essay with whom he established an air charter company at Gatwick airport in the early 60s and with whom he had the pleasure of flying royalty, VIPs and pop stars all over Europe. The Company was called Sky Charters and Peter was Managing Director but unfortunately this venture came to an end when Essay’s financial support ceased to be available.  He stayed in air charter work for a few more years as MD from 1965 – 68 of Endeavour Aviation, then moving to CSE Aviation as Sales Manager and Demonstration Pilot. It was at this point he decided on a new venture and from 1969 – 1972 became the UK Dealer Development Manager of Mercedes –Benz before moving to Audi NSU and then from 1972- 1988 to Barclays De Zoete Wedd as Admin Director. He stayed with BZW until his retirement, which he enjoyed for a busy 23 years. 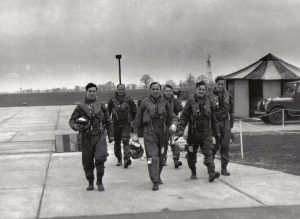 Peter’s RAF Awards and Commendations were:

1955 – Letter of Commendation from the Commander of the Combat Crew Training Squadron at Nellis AFB for outstanding devotion to duty, initiative and professional ability.

1957 – Green Endorsement in his log book for recovering a spin in a Hunter that was being tested for aero modifications. The spin lasted from 36,000 ft down to 10,000ft

With thanks to Peter’s wife Edna and his sons Russell and Alan for their help in preparing this overview of Peter’s life.