Russ Allchorn writes: ‘On the 12th March the Tiger fraternity, the Royal Air Force and, most importantly Sue, were forced to say their farewells to an irreplaceable officer and gentleman, Sqn Ldr Pete McNamara, known affectionately to all as M Squared.  Pete was taken from us following a 18 month battle fighting cancer.  For those of us that were lucky and privileged enough to have known and worked with Pete he will leave an enduring memory.  A true gentleman he combined professionalism, compassion, loyalty, friendship and an unrivaled sense of humour in a character that no one could fail to love, respect and aspire to replicate; his acidic wit and infamous ability to ‘banter’ and deliver hilarious one-liners will endure forever. 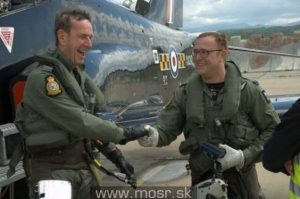 There are numerous anecdotes that one could recite from Pete’s time in the RAF but one in particular stands out for me. Whilst flying the Phantom F4 at RAF Leuchars Pete was tasked to fly a Royal Navy helicopter pilot in the back seat of his aircraft as part of a liaison visit.  Whilst in the air they worked with a Royal Navy Sea King Airborne Early Warning Helicopter.  Upon checking in with the helicopter the Royal Navy crew said to Pete ‘Have you got one of our chaps in behind you?.’  Pete’s lightning quick, yet professionally calm response, was a classic, ‘Negative, we don’t go in for that kind of behavior in the Royal Air Force!’

As an aviator Pete was the consummate professional, always on top of his game, yet completely humble as to the quality of his own abilities.  In my early days on 74 (F) Sqn I was lucky enough to be taken under Pete’s wing, made to feel human and part of the team. He gave me a confidence in my own abilities that was lacking but also taught me at the same time. It was like an osmosis effect with Pete – he was so natural you never realised straight away just how much knowledge and experience you were taking in.   Pete’s love of flying was unquestionable. He lived for aviation in the RAF, so much so that he fought relentlessly against the numerous calls for career progression knowing that such a path would restrict his opportunities to continue flying.  He was never once posted to a ground tour and flew right up to the day he was diagnosed with this cruel and indiscriminating disease.

I know I speak for all who were lucky enough to have known and worked with Pete when I say that it was a huge privilege and honour to have socialised and worked with him and to have played a small part in his life.  He was that one in a million and his memory will endure forever.  We will miss him terribly, always.  So long ‘Bruv’! 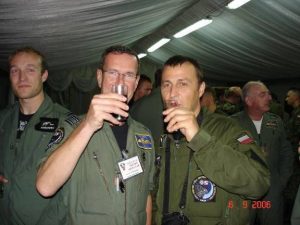 Pete’s wife Sue chose this picture as ‘one that shows his character as people will remember him – and of course it involves vodka!’