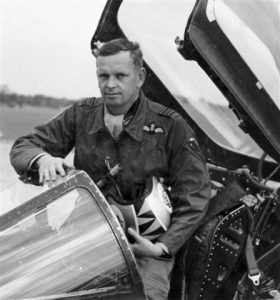 Group Captain Peter Botterill CBE AFC, who succeeded John Howe as CO of 74 Squadron, died on March 27th aged 81. When he arrived on the squadron on 12th December 1961 it was operationally inactive, for the Lightning F.1s were again grounded, this time through hydraulic problems which could only be solved after major engineering work by English Electric’s Contractors Working Party. The work took two months and it wasn’t until 26th March 1962 that the first aircraft re-emerged from the hangar and it was the end of May before all the Lightnings were serviceable again. This would have been a challenge for any squadron CO taking up his post and was especially so in Peter’s case, for as soon as he had his aircraft back he led eight of them on a promotional deployment to Sweden. Then Fighter Command decreed that 74 would form the official acrobatic team for 1962. Working up for this began as soon as the Swedish trip was over. Farnborough was the centrepiece of the display season and this year would be an even more spectacular display at the famous venue, for 74’s Lightnings were to perform synchronised aerobatics with the Hunters of 92 Squadron – the Blue Diamonds. It was an unqualified success. After Farnborough, Battle of Britain displays were flown – and only then could 74 get back to operations. The following year Peter welcomed Princess Margaret to Coltishall which she had come to see ‘at work’. Then from November ’63 all thoughts turned to an impending move to Leuchars and the CO flew up to sort out the many hangarage and accommodation problems the move meant. It was January 1964 before the squadron itself could move. Peter Botterill remained as CO until 14th December of that year and during that time he oversaw the transition for 74 from the Lightning F.1 to the F.3.