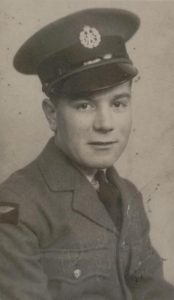 John Gill, who lived in Hornchurch, died on May 11th after a brave fight against illness. He was 89. John, a rigger on B Flight with a particular responsibility for Flight Commander Paddy Treacy’s aircraft, was a Tiger between August 1939 and March 1940 having joined the RAF in 1938. He had a prodigious memory and recalled his time on 74 very clearly, so much so that he was a great source of information for  the squadron history, Tigers. He remembered John Freeborn very well and at Biggin Hill for a book signing (A Tiger’s Tale), the two John’s spent considerable time reminiscing about those early days of the war on the squadron. As always our thoughts are with John’s family.