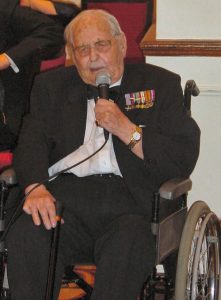 John with his mother at Buckingham Palace for DFC investiture 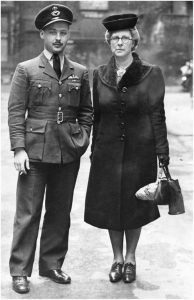 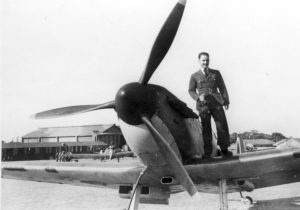 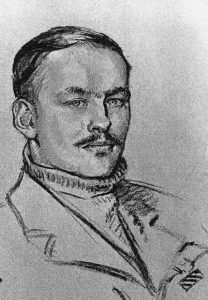 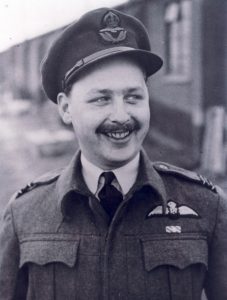 Wing Commander John Connell Freeborn DFC* died on August 28th. John was 74 Squadron’s last surviving Battle of Britain pilot and with his passing we come to the end of an era. A regular attendee at reunions, 74 Squadron was always to John his ‘beloved’ 74 Squadron and although his career in the RAF subsequently was a highly successful one he never really stopped being a Tiger. We always treated John as our guest of honour at reunions. Which of course he was. And year by year we asked him to say a few words.  Which he did – to a hushed room as he recalled a particular combat or experience. And at the end of which everyone stood and applauded long and loud as they demonstrated their love and respect for a man to whom we all owe so much.

Along with his good friend and organiser of 118 Squadron reunions, Wilf Crutchley, I was asked to speak at John’s funeral in Southport on September 7th (writes Bob Cossey). Appropriately this was the 70th Anniversary of the beginning of the London Blitz during which the RAF fought against the Luftwaffe so heroically to try and prevent them getting through, although 70 years ago onSeptember 7th 1940 74 Squadron was actually far from the fighting, temporarily finding themselves at Kirton in Lindsey in Lincolnshire. Three weeks earlier they had been pulled from the front line to rest and recuperate. They had flown intensively since the Battle of Britain began on 10th July 1940. On the 11th August for example they flew into battle no less than four times between dawn and two o’clock in the afternoon, during which time they claimed twenty three enemy aircraft destroyed, one probable and fourteen damaged. Of this total John shot down four and damaged one. Little wonder that they were exhausted and desperately needed to rest, although at Wittering and Kirton and indeed at Coltishall to where they would move on the 9th September they still flew many training sorties. Sailor Malan saw to it that they would not lose their edge while they were away from the battle and in truth, whilst 74 appreciated the chance to recuperate, they were also eager to get back into the fray although it would be some weeks before they returned south to Biggin Hill to do just that. John, however, had already returned south himself on September 3rd for a very different reason. He went to Buckingham Palace to receive the Distinguished Flying Cross (to which would later be added a Bar).

John was an ace in every sense of the word. He flew and fought in the vicious skies over the beaches of Dunkirk, in defence of the country in the Battle of Britain (during which he accumulated more hours than any other pilot of any other squadron) and from the end of 1940 on sweeps over France as the RAF took the fight to the enemy. By the time John left 74 he had shot down thirteen enemy aircraft. It had all started so tragically though when John and Paddy Byrne shot down two 56 Squadron Hurricanes just three days after war was declared when the aircraft were misidentified. One pilot was killed, the other survived. Both Tigers were exonerated and acquitted at the subsequent court martial but the memory of it never left John and he said that never a day went by without his thinking of Pilot Officer Montague Hulton-Harrop, the man who died.

I personally got to know John when he returned from living in Spain. I had been trying to discover his whereabouts for some years as I had been writing the squadron history and I very much wanted his input. Just too late I found him. Too late because Tigers had just been published! I first met him at Stratford on Avon when he came to his first reunion. And I vividly recall that meeting when it became very apparent to me that, notwithstanding the rest of his distinguished wartime career, there was always a special place in his heart for 74 Squadron which he had joined straight from training in October 1938 and didn’t leave until May 1941. And after that first meeting I realised that here was another book that needed to be written. And it was – A Tiger’s Tale – John’s story from his birth on December 1st 1920 to his leaving the RAF in 1946 and a few pages to conclude about his life in Civvy Street.  (Recently Chris Yeoman has written Tiger Cub which deals more or less exclusively with John’s time on 74.)

His integrity as a pilot was never in question. His allegiance to the squadron was absolute. He may not have always liked or have agreed with some of his colleagues – often senior colleagues – but he always acknowledged their abilities as pilots. And he always recognised that whatever the discord or disagreement on the ground, when 74 was in the air all that was put aside and the squadron became a superb fighting team which made it one of the very best in Fighter Command.  But this was the time in which he often told me he lost his youth. ‘I shouldn’t have been thrust into that situation,’ he said. ‘But I was there and couldn’t do anything about it. I had a job to do alongside everybody else and I did it to the best of my ability.’

He was certainly not the man to avoid danger. Neither was he a man to shun controversy. He was always a straight talking, straight acting person and remained so throughout his life. I suppose you could say John was never politically correct.

In his private life John could be a generous man. My wife Angie and I are involved with a charity in Norwich that helps young adults with learning difficulties. One of the programmes we run is an allotment project where ‘grow your own’ skills are promoted. John got to hear of this and showed a keen interest. Thereafter a cheque would arrive in the post from time to time to award as a prize for those who grew the most potatoes or the biggest cauliflower or the tallest sunflower or whatever. And then a substantial cheque for tools for the allotment came. We would also receive in the post packets of seeds that John had bought, or found somewhere or had been given. He was very fond of flowers and many of the seeds he sent were indeed flowers which have added colour through several summers to the allotments. When they bloom in subsequent years we will always think of John.

And his support of the Tiger Squadron Museum fund has been similarly generous with regular donations, often in the form of fees from the book and print signings he attended: or from individuals where he stipulated that a donation to the fund was what he required.

I last saw him at the end of July, just before he was admitted to hospital for the final time.  I drove up to spend an afternoon with him in his flat in Southport. And we did what we always did – talked about his time as a Tiger and his other postings in the RAF, although in truth the conversation always came back to 74 Squadron. And we talked about John’s other interests as well, particularly steam trains and his stories of the footplate rides he managed to get when he was a youngster. And even a very short career as a tram driver in Leeds when he was at home on leave one time and volunteered to help as there was a shortage. But driving a tram wasn’t as easy as flying a Spitfire and his help lasted around 300 yards before the Company decided this wasn’t for John!

Words alone are not enough to convey the great debt that all of us owe to John Freeborn and his colleagues of the Battle of Britain. It has been one of the great privileges of my life to have known him and I will never forget him. Nor will any of us in the Association. He was one of the last of The Few. And he was truly a great old Tiger.