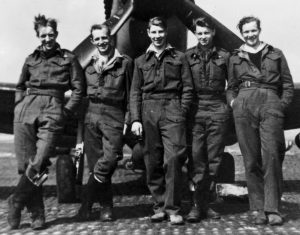 John on the left of this ‘Tiger’ Group

John Bennett, who has lived in Canada since the 1950s, died on February 18th.

Born in South Wales in 1920, John joined the RAF in 1939 as a W/Op before taking a commission and learning to fly. Training complete he joined 611 Squadron in June 1944 and was posted to the Tigers in January 1945 with whom he stayed until July 1946. Post war he, along with the rest of the squadron, moved from flying the Spitfire to the Meteor. His last 6 years in the RAF were spent with the University of London Air Squadron with whom he flew whilst he was training to be a doctor.

John’s neighbour and close friend Howard Leigh remembers ‘we had delightful hours talking about 74, Sumburgh,  ocean sailing, the Sunderland project at Pembroke Docks, the Withybush Spitfire Restoration Project, Haverfordwest in the early 1900’s, Dylan Thomas, …..the list goes on and on!’

The following obituary appeared in the Ottowa Citizen:

Dr. John Sutton Bennett MB, BS, FRCSC (C), FACOG, FASAS, LMCC passed away very peacefully at the Queensway Carleton Hospital on February 18th. His wife of 62 years Robina, his daughter, son and grandchildren were at his bedside. John grew up in South Wales and joined the Royal Air Force in 1939. Following the war he attended St. Mary’s Medical School in London, earning his degree in 1953. After a brief practice in England he emigrated to St. John’s Newfoundland for four years before relocating to Kelowna, British Columbia in 1959. Ten years later the family moved to Ottawa where Dr. Bennett joined the Canadian Medical Association as Director of Scientific Councils, subsequently retiring in 1991 as Associate General-Secretary. His prolific participation on councils and committees impacted numerous aspects of healthcare across Canada and the Caribbean. John’s many hobbies included his 1957 Series 1 Land Rover, sailing, amateur theatre, refereeing soccer games, hand carving Victoria style wooden rocking horses and running marathons.

John was a man of many parts who will be greatly missed. He was always a great supporter of the Association and although he hasn’t been able to attend reunions, in the early 1990s he was in this country and came to one at the RAF Club with his former fellow squadron member Hugh Murland., making many friends amongst fellow Tigers that he met there.