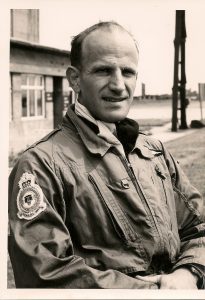 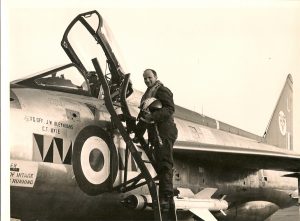 Jacques Kleynhans died on on 19th June and was buried at the parish church in Ardee in County Louth Ireland in the Tiger jumper that he bought from the Association. His wife Desiree writes:

‘Jacques always wanted to fly  – it was his first love –  and he obtained his pilot’s licence before he was old enough to drive a car. He joined the South African Auxiliary Air Force and flew at week-ends. He was taking his Chartered Accountant’s  articles when he applied for a commission in the SAAF. He was offered a four year commission but he felt he wanted a longer life in the flying world and so took a chance and came to England where he was accepted into the Royal Air Force and was offered a twelve year commission.On completion of his initial training this was raised to sixteen years which he was delighted to accept. His first posting was to 74 Squadron and he was there when they converted onto Lightnings, a huge thrill for him. He had the honour of being the first member of the Tigers  to fly solo at night on the type. His next posting was to a Britannia squadron flying out of Lyneham in Wiltshire –  a complete contrast to his previous posting of course.  But his last posting was special, even though it involved no flying. He was sent to Singapore to Air Traffic Control. which was wonderful for his family of five children.

During his time in Singapore Jacques became involved in the ANZUK golfing society and ran the Forces golf meetings at the Singapore Country Club. He took a correspondence course in Golf Club Management,  where he saw his future after retiring from the RAF. Returning to South Africa he was engaged by a club in Alberton, south of Johannesburg,  where he stayed until he was head hunted by the Royal Salisbury Golf Club in Rhodesia. He stayed there until independence was granted in 1980. Subsequently he applied for and got a job in Ireland  at the first Arnold Palmer golf course in Europe, built eight miles outside of Tralee in the west of the country. This course is today a tourist mecca for golfers from all over the world. Following this he was offered a job at Frilford Heath Golf Club near Abingdon in Oxfordshire and moved there in 1988. Once again luck was with him and while he was there the club bought a derelict farm and built a third eighteen hole course. Frilford now boasts three eighteen hole courses and is one of the most prodigious clubs in southern England.’

Jacques is survived by two sons and two daughters, seven grandchildren and his wife of fifty nine years, Desiree. Our thoughts are with them all.