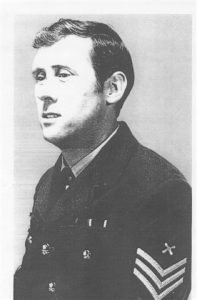 Reg Grundy died on 16th September after a long residence in Caroline House at the Colman Hospital in Norwich. He was with 74 on Meteors, Hunters and Lightnings at Horsham St Faith and Coltishall, serving with the Squadron between 1954 and 1963 as an airframe fitter and holding the rank of Sergeant. After the Tigers, Reg served with 1417 Flight at Aden, 226 OCU back at Coltishall, 19 Squadron at Gutersloh and at Marham working on technical decoding. In 1976 he was discharged on medical grounds from the RAF then twenty nine years ago he went into Caroline House for a fortnight’s rehabilitation having been diagnosed with MS – and never came out.  In the process he became the longest serving resident of the neurological unit and became a legend in his own wheelchair which he got around in by operating it with his mouth and chin. With his communication pipe he could switch lights on and off and operate his TV and radio – but he used to joke that it could never pick out horses that won. In short he was an inspiration to all around him and will not easily be forgotten by all those whose lives he touched.