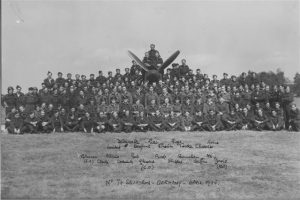 Joe Staples, a pilot with the Tigers in 1945 and 1946 whilst holding the rank of Flight Lieutenant, passed away on May 26th aged 88.  He is survived by his wife Mary and two sons. Mary writes:

Joe was at Teacher Training College in 1939 and his call-up was deferred until late 1940. After initial training he eventually got his Wings and became an EFTS instructor at Brough. In February 1942 as stations were being transferred to western Canada to facilitate safer training Joe was sent to Pearce, Alberta. In August of that year he moved to 3FIS at Arnprior where he trained pilots to be instructors. He stayed there until March 1944. Returning to England he undertook further training himself and became a Spitfire V pilot in January 1945 when he joined 74 Squadron at Schindjel in Holland. He next moved with them to Drope in Germany before returning to England and Colerne at the end of the war where he converted to the Meteor.

In January 1946 Joe was recalled to complete his teacher training which meant an abrupt end to his flying career. However whilst at Wintringham Grammar School in Grimsby he was active with the ATC where he helped with gliding and then each year had a week during the summer at various RAF stations – but as he used to say, not quite the same as flying Spitfires!