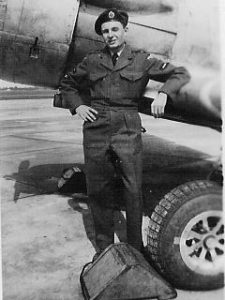 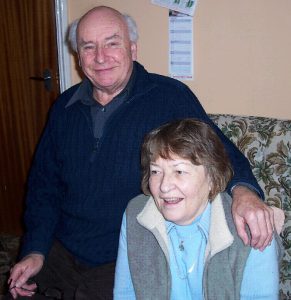 On 15th June 2008, Ian Michael Papworth passed away aged 75, after suffering from cancer of the liver and lungs. His natural son and daughter were with him at the end.  Sadly his second wife Joyce was also found to have had the same disease but of the stomach and she passed away just 12 days before he did.

Ian who served as a Chief Tech (Radar) with 74 Squadron during his time at RAF Tengah in Singapore, was diagnosed with bowel cancer back at the beginning of 2007. Ian had an operation to correct that later in the year and this was actually successful but alas, the disease had spread to his liver and lungs.  By the time he had recovered from the first operation it was found that the spread of the disease was too far advanced and further chemo failed.  Towards the end of the year, his second wife Joyce began to feel unwell and it was a great blow to all the family when it was found that she too had cancer.  Both are now finally at peace and reunited.

David Papworth,  Ian’s son (also ex RAF) put together a eulogy, which was read out at Ian’s funeral on 25th June 2008.  It has been adapted for this website and covers Ian’s RAF career.

Ian was working for his uncle, when national service began to loom large and a friend of his uncle, a retired Group Captain suggested Ian “jumped the gun” and enlist in the Royal Air Force.  Ian agreed with this, but didn’t know what trade to go for. “Go radar” the good Group Captain had said.  Ian did not have a clue what radar was but all that was soon to change.

4068204 Aircraftsman Papworth I.M was soon at RAF Cardington to collect his kit; in fact, this took place in one of the two large airship hangars which are still in place today.  From there he went to West Kirby for basic training along with some very charming people known as drill instructors.  At West Kirby these charming people spent a lot of their time in telling Ian and others what “orrible little men” they were and getting them to carry out such menial tasks as polishing floors, painting coal buckets, polishing brassware and of course their shoes.  Dad must have thought for a time that he was back at that boarding school.  However, despite all this he grew to like and respect his drill instructors.  As Ian put it, “it did me no harm, what a shame some of these ‘yobbos’ today don’t go through the same process”.

After basic training was over Ian went to RAF Yatesbury where he carried his trade training passing out as a radar fitter in 1953.  From here, various postings followed and in 1957 while at RAF Abingdon he met and married Ann Elizabeth Holmes, mother to Gill and David (author). Another posting was to 25 SQN at Waterbeach, which then moved to Leuchars.  It was here in 1963 that Ian had his most memorable RAF achievement.  The cold war was in full swing and the Javelins used to patrol out over the North Sea returning to base using a radar based tracking system.  This was a kind of forerunner of today’s sat nav system, it would show the pilots where they were in relation to a handful of transmitters on the mainland by displaying dots on a screen and this system greatly helped them find their way back to base.  The system was supposed to have a range of several hundred miles but over time this had been drastically reduced and no one at the time was quite sure why.  Ian (by now a Sergeant) and his team were given the task of solving this problem, which apparently had eluded others before him.  Well, after a while he had the problem solved, he found that a tiny amount of water was leaking in to the system through the seals, once cleared of water dad had each aircraft’s system accurately re-tuned, suddenly the range of the system shot back up to design levels.  The aircrews were extremely grateful for this and Ian received a commendation from the C in C of what was then Fighter command.

After this incident Ian became an instructor, returning to RAF Yatesbury, where he had completed his training.  From here, he went to RAF Cosford, where he was one of two Chief Technicians to be selected to learn about a then brand new “state of the art” radar system which had been designed for the Lightning fighter.  After the course, he applied for and got the Chief Tech post that 74 SQN were looking for before their deployment to RAF Tengah in Singapore. This was a family accompanied tour. Ian’s family had what can only be described as a fabulous two and a half years over there.

In 1969, Ian was posted back to the UK and in 1973 ended his service days at RAF Boscombe Down having helped the Navy of all people with some radar research work.  After a short spell as a civilian on the base, Ian went to Marconi Systems at Frimley.  It was at this time he and Joyce decided to make a new life together.  Ian finally moved to British Aerospace and moved to a village near to his new job where around 1980, Joyce and he bought a house for themselves.  They lived here in retirement until their deaths earlier this year.

Ian and Joyce leave between them three daughters, a son and eight grand children.

At Yatesbury during training you could avoid cleaning out classrooms on domestic mornings by getting hold of a large brown envelope, or broom, and marching very smartly around the camp looking as it you were going “from A to B”.  No one ever stopped you.

In 1958, the Astra cinema at Yatesbury decided to show a “naturist” film, which promised female nudity.   Now in 1958 censorship in this country was very strict.   The British Board of Film Censors decided what you could or not see on the cinema screen, but some how or other this film had got past the censor.

Hundreds of men were queuing to get in to this wood built cinema at the appointed hour – yours truly among them.   Soon this single story building was packed.   Every available space was filled, including the aisles between the seats.   There were no “fire and safety” regulations in those days.   Come the magic moment.   The young lady got out of her car – looked up the beach – all ok – looked down the beach – all ok.   What a wonderful day for a ‘sunbathe’.   The blouse began to be undone.

The blouse fell away.

The camera zoomed in to a beautiful blue half bra, scalloped at the top edges.

Her hands went to the clip at the back of the bra.

600 men continued to hold their breath.

You could have heard a pin drop.

Would the camera pan away as it usually did?   Please God no!

But no, it didn’t pan away.   It zoomed closer.

Then the bra fell away, revealing the most beautiful pair of bare breasts you have ever seen.

There followed about 2 seconds of silence.

Then pandemonium broke out.   People cheered, roared, jumped up and down, and nearly tore the place apart.   Such was the impact of a pair of breasts on the screen in 1958.

We had a lot of Poles in the RAF in the 1950s.   Most of them had escaped from Poland in 1939, and joined the RAF to continue the fight, (WWII).   We had a Squadron Leader at Yatesbury who was as tough as old boots, who had never quite mastered the English language.   I remember him giving us a “pep talk” before an annual parade conducted by the Air Officer Commanding of the group. –  “Zur AOC vill enjoy seeing you parade, as you vill enjoy parading for zur AOC.   So when you are marching on to zur square I vant to see lots of happy smiling faces.   LOOK AS IF YOU ARE ENJOYING IT !!!”   “ And ven I give you za eyes right, look him in zur eye – tip him za vinkle !!”   This same character, with respect to the technical training, insisted that all students should “be above zur class average”…….

In all my time in the Royal Air Force (22years) I never remember a single drugs problem – unlike today.   However the Air Force was obsessed with the problem of VD, and to this end we were marched in to the cinema to see films about the evil of “loose living”.   These were mainly American films.   The “no sex please, we’re British” didn’t seem to have any films of their own.

They had posters though, and these were stuck up at the entrances to the messes, and depicted a sensual young lady, perched on a bar stool, wearing a green ‘button-through’ dress whilst she held aloft a cocktail glass by the stem.  Underneath was written “clean living is the only way”.   The airmen used to delight in defacing these posters in the most delightful way, which caused great amusement.   One wag once wrote on the bottom “I don’t care if I do go blind, I can always sell matches”.

In mid 1957 I was posted to RAF Luqa in Malta, and sailed out of Southampton for this posting on the good ship ‘Empire Ken’, which was one of the last troopships ever to be used. I was one of 20 RAF personnel on this ship, the other 700 being army. The services were still obsessed with VD, and we had had an FFI at the embarkation camp. (Free from Infection Inspection).  Whilst sailing, we had another one.   This involved hundreds of men queuing naked along the companion ways and down to the next deck to be confronted by a bored looking army medical officer who lifted your privates with his officer’s baton to have a quick look underneath in order to prescribe you “free from infection”.   When I got to Malta I would yet have another FFI.

On that same ship there were first class (officers) second class (senior NCOs) third class (unaccompanied airmen’s. wives) and “troop deck personal” (me).   We lived about four decks down.   During the voyage (and being a corporal), I was given 6 soldiers and made “NCO I/C ships balloon blowing up party”.   This was a very responsible position, for I was responsible for providing enough balloons for the first class parties enjoyed by the officers and their ladies.   Later on as we got into the Med, I and my six soldiers would be blowing up balloons on the stern deck and letting them over the end so that the upper echelons could fire at them from the rear deck above us with Lee Enfield 303 rifles.

Around 1960 while on 25 SQN at Waterbeach, the squadron, being a night fighter squadron, entailed a lot of shift work, our Engineering Officer used to get regular phone calls from a Brigadier, asking if his son – a lowly airman – could be excused weekend work as they had important family functions.   Our Engineering Officer used to almost stand to attention by the telephone and generally agree to the requests.  One day he asked the airman what regiment his father was in – “Oh, he’s not in the forces, he’s a Brigadier in the Salvation Army!”   I won’t repeat what the Engineering Officer then said.