It is with great sadness that I have to report the passing of yet another of our ‘Tiger family’. 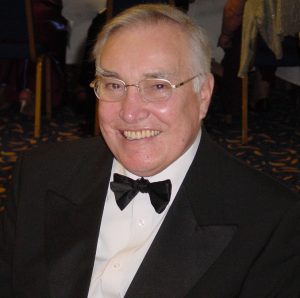 Hugh Rees, from the Meteor era and an ever present at Squadron Reunions, passed away on Monday 10th September. He was a fighter to the end in true Tiger tradition.  The funeral took place on Wednesday 19th September at Christchurch in Old Town, Swindon,at 2pm. Our thoughts are with his wife Liz and with his family.

If anyone wishes to mark his passing donations are to go to the RAF Benevolent Fund.

The following has been kindly provided by Liz Rees.

`We had a wonderful celebration of Hugh’s life` she wrote. `The church was packed with family and friends and the whole service paid a great tribute to a very gentle and good man. I know he was my dearest love but he was such a good person and had such a strong faith in God and love for his fellow man. The local Air Crew Association (he was their Chairman for ten years until he became too ill) were in their best bib and tucker as a guard of honour at the church door and the standard bearer did a wonderful job with the standard. Members of the local Probus group were there (he was a past President) and his friends from the Aviation and Military History Groups he belonged to also came as did so many of his friends from his past working life. The Revd Simon Stevenette knew Hugh well and in his address he captured the essence of my husband`s warmth and humour and his love of the RAF, especially his beloved Tiger Squadron. Our sons Michael and David read some wonderful words about what their father meant to them and another vicar read some words from me. There was a special hymn from our wedding and the service ended with ‘Guide me O thou great Jehovah’ with its strong associations with Wales and with Rugby, both of which he loved.  Although it was such a very sad event it also was uplifting and joyful too and a fitting farewell to Hugh. Thank you to all the Tigers for your kind thoughts and support.`