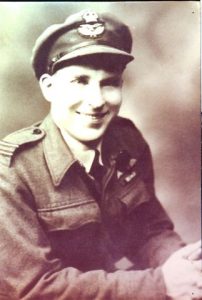 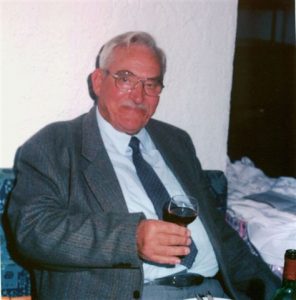 George Farley was a Tiger in 1943 serving in the Middle and Near East. He died in January and his family prepared this obituary.

Born to the sound of Bow Bells on 10th April 1922 George was proud to say he was a Cockney. He was good at sport and at Richmond ice rink excelled at figure skating and ice hockey. The son of a craftsman he inherited the desire to create and always had a project on hand, whether it was to build his own boat or assist Margaret Thatcher with his ‘Inflation Negation Plan’.  When the family moved to Three Bridges, he helped his father to build a new home.

George was a good scholar, always with a clear understanding. He studied aeronautical engineering design at Kingston Polytechnic. It was a time of rapid development in the aviation industry and his sister Kathleen got him a job at Hawker Siddeley Aircraft in Kingston. However, his main interest in life was not to design aircraft but to fly them and he was accepted into the Royal Air Force on 12th October 1940 and was awarded his Wings eleven months later. His logbooks show that he spent time in Africa flying a variety of aircraft including Spitfires and Hurricanes.  Whilst there he was involved in an accident as passenger in a jeep and suffered a badly damaged left arm.  No longer able to fly, he was demobbed from the RAF, but his own determination and with the attention of a top surgeon; his arm was given back most of its mobility.

Before long he was back in the aircraft industry at De Havilland`s at Kingston where he worked on the Comet and the Venom. At the same time, he was phasing in some flying again and on 15th March 1949, he rejoined the RAF. He was a highly capable pilot and was the envy of colleagues because he understood the dynamics of flight. He spent the majority of his career training others. He designed flying aids to calculate range and to demonstrate flying on one engine. For this and his other achievements, he was awarded the AFC.

When he left the RAF, the family home was established near Chichester. He was employed by a number of airlines such as British Eagle, Lloyd, Britannia and spent time in Kuwait in pilot training. He was in some scrapes, the worst of which was a ‘wheels up’ landing at RAF Manston in Kent. Sadly, a bad heart condition finished his flying career and he spent the rest of his life in management. When his children flew the nest George and Marie moved to Llanfairpwllgwyngyllgogerychwyrndrobwllllantysiliogogogochon the Isle of Anglesey where, far from resting, he built a conservatory, a summer house, three boats, two model aircraft, lots of furniture and maintained the car fleet!