I am very sad to have to report the passing of one of our members. 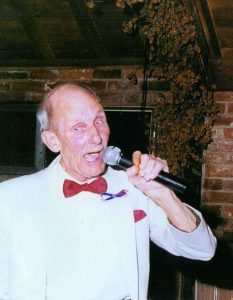 Fred Page, who died on Monday 16th July, was a loveable Cockney with a wealth of stories about his time in the army in Palestine and about his days as an entertainer. Who he hadn’t met and sometimes worked with is an easier listing than those he had – from Max Bygraves to Morecombe and Wise to Warren Mitchell. He was a cleaner on the squadron between 1988 to 1993 at Wattisham. Quickly endearing himself to everyone, he was adopted by the Tigers and after their disbandment on Phantoms in 1992 he kept those (mainly groundcrew) left in the Wattisham area up to date with news of promotions and postings of their former colleagues.  Squadron CO Graham Clarke – always known to Fred as `The Boss` –  was best man at his wedding to Edna (both were in their 80s at the time!)

Fred and Edna`s little bungalow in Needham Market in Suffolk was a shrine to the Tigers with the walls of the lounge adorned with pictures and prints of 74`s aircraft, tiger’s heads, scarves and stickers and all those serving on the squadron who Fred knew. He kept in  contact with air and ground crew alike after his retirement and he always looked forward to his birthday and Christmas when he knew that he and Edna would receive a sackful of cards from ex-Tigers the world over wishing them well.

Our sympathies and condolences go to Edna who, over the time she knew Fred in the latter years of both their lives, soon realised she had found a very special companion. She will miss him greatly, as will we all.

The funeral took place at Needham Market, Suffolk, on July 25th at 11.15am.