I am sad to report the passing of two of our loyal members.

Those who attend the reunions, will remember this lovely couple.

We offer our sincere condolences to their family. 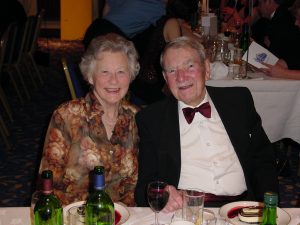 The following Eulogy was written by Bob Cossey prior to the passing of Joyce.

I’ve known Eden and Joyce for ten years or so and the reason our friendship came about was Eden’s joining of the Royal Air Force 74 Squadron Association. Let me briefly explain that 74 Squadron was one of the RAF`s greatest fighter squadrons – I say `was` because it has now disbanded along with many others and will I fear not reform. It came into being in 1918 but the finest hour in its history came in 1939 and 1940 when some of the famous names of the Battle of Britain served in its ranks, the most famous of all being Sailor Malan. Such was the aggressive spirit shown by the squadron that they became known as the RAF`s Tiger Squadron.

Eden was a Tiger. He joined 74 on 5th January 1939 and served through to March 1940 – a fourteen month stint of which he was inordinately proud. He held the rank at that stage of Group 1 Trade Fitter 2 and as such was certificated to carry our modifications and inspections, repairs and replacements to all classes of aero engines and airframes – quite a brief. In 74 Squadron’s case, the aircraft at that time was the Spitfire. And in Eden’s case it meant that he was given the responsibility of looking after Sailor Malan’s aircraft. It was that fact in particular that Eden was always so pleased to remember. Sailor went on to command 74 and furthermore was the highest scoring fighter ace the RAF had until 1944 when his score of 29 enemy aircraft shot down was overtaken.

Eden had joined the RAF in January 1936 and he left in March 1950 holding the rank of Sergeant. Typical of the man, when I asked him to complete a membership record form when he joined the Association his attention to detail was such that he completed two additional foolscap sides too! That is one of the things I will always remember about Eden – the great care he took with facts. And he had plenty of them! A greater fund of knowledge about the RAF during the years he served I have never found. It wasn’t only about his immediate circle, his immediate environment. During the fourteen years he served he made many friends and worked with many colleagues. He knew all about them too, where they had come from, what path their service career had taken. He kept in touch with many of them – and latterly took great delight in rediscovering old colleagues. Thanks to Eden’s efforts the Association’s membership was raised a notch from time to time!

After leaving 74 Eden was posted to South Africa where he served on the engineering staff of various Flying Training Schools which provided bomber and fighter pilots for the RAF for the remainder of the war. The posting was highly appropriate as South Africa was Eden’s birthplace although he had moved to England as a young boy. He got to know Salisbury, Durban, Bulawayo and Cape town pretty well over the five years he was there with the RAF. He returned to the UK in the Mauretania in 1945 but didn’t stay for long because he was posted in short order to the Middle East where he joined 249 Squadron. He returned top the UK in 1947 and served for the remainder of his RAF career at Odiham. He left the service in March 1950 and the following month started his career with APCM (Blue Circle) – his first experience of Civvy Street since leaving school in December 1935. Quite a career in a Royal Air Force he loved.

As I said at the beginning it was through the annual reunion of the 74 Tiger Squadron Association at Stratford upon Avon that my wife Angie and I got to know Eden and Joyce. What a charming couple they were and we came to look forward each year to conversation with them over that weekend as did many of the Tigers attending. Joyce had been used to the service environment prior to her meeting Eden thanks to her father being a member of No 1 Squadron which he joined during the first war. She herself had tales to tell of being a RAF daughter as well as being a RAF wife. And Eden had many a tale to tell as well, a seemingly inexhaustible supply of anecdotes about all aspects of the RAF and the people who served in it. He was a member of other Associations too, not least the 33rd entry of the RAF Halton apprentices and I imagine some of the stories he told were recycled depending on who he was telling at the time!

One thing about the 74 Squadron Association – and Joyce remarked on this the other day when we were talking – was the fellowship across the generations that attend our reunions, for we always have the senior membership alongside those youngsters who are still in the heydays of their RAF careers. Eden was of course one of our senior members and as such he was much sought after year by year by the younger Tigers who forever encouraged him to talk about his career – especially his time serving under Malan at RAF Hornchurch. Eden always responded with enthusiasm. That was another of the hallmarks of the man in my experience – he never did things by halves when it came to service matters. The youngsters were enthralled by all that Eden and his contemporaries could tell them. At the other end of the spectrum we are fortunate in the Association in that we have some very senior ranks who join us for the Stratford weekends too – and Eden was just as happy regaling them with his stories as well!

He didn’t however restrict his storytelling to the bar afterwards. He would invariably get to his feet during the after dinner speeches and ask permission to say a few words and would address the assembled congregation. I remember the first year he did this Joyce told me her heart sank to her boots – but she needn’t have worried for Eden soon had his audience in the palm of his hand. Thereafter it became an annual occurrence and we all looked forward to Eden speaking.

We will also remember Eden’s resilience at Stratford when, after the dinner and speeches are over, we all drift towards the bar. As time passes by couples call it a night leaving just a few hardy souls in the wee small hours still swapping stories, still downing  a pint or two! Eden was invariably amongst them, Joyce having long since retired. He loved these occasions, the opportunity to be with fellow airmen, something which never left him.

We are all going to miss Eden for all sorts of reasons. I’ll miss his unfailing politeness and courtesy – he was indeed a real gentleman, a charming man. I’ll miss his enthusiasm. I’ll miss him bringing me every year a new photograph he had found of the Squadron and its members, a photo probably taken 60 years or more ago, all fully annotated with names, places and events. I’ll miss his advice and his knowledge – if ever during the course of my research into the Squadron history I needed to know or check something from his era I’d always turn to Eden first. Angie and I will miss him for his engaging conversation, for his sense of humour, for that twinkle in his eye.

The whole Association will miss him being at Stratford – although we know he will always be there watching over us, another story on the tip of his tongue. The hearts of all of us go out to Joyce and the family, but I know that something of the Tiger spirit has rubbed off on them over the years too and that will help them through this difficult time.

There is a traditional way in which members of 74 Tiger Squadron have always signed off either in words or action when completing an operational briefing, a written order, a letter, even a night of convivial merriment. Part of it I cannot demonstrate here in church because it would involve considerable physical effort by rolling on the floor and kicking my legs in the air – although I well remember Eden having a go some years ago!!

But what I can say is rest in peace Eden.