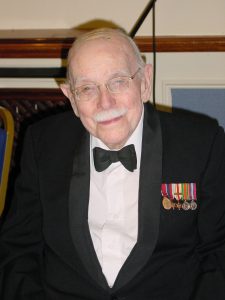 The Association and the Squadron have lost a great champion with the death of Doug Tidy on April 14th, just four days short of his 87th birthday.

There are two reasons for saying this. Firstly, because of his well known book I Fear No Man which chartered the squadron history to the end of the Lightning era and which was a successor to Ira Jones Tiger Squadron which dealt primarily with the Tigers in World War One. Doug’s book was an inspiration for my Tigers and Doug freely gave of his help and advice when that was in preparation.  Secondly, because he was one of the main instigators, along with 74 Squadron Commanding Officer ‘Brookie’ Brookes (who led the Tigers in the inter-war years) in the commissioning and presentation of the Malan Memorial Sword which was used thereafter as the ceremonial sword of 74 Squadron. He also ran his own website for many years, dedicated to The Tigers [http://dptidy.tripod.com/74sqna.html].

Doug’s career – indeed his life – was a remarkable one of great variety and a few years ago he committed its details to paper and gave it to me amongst others for use at times such as this. It will be published in full in Tiger News 52 in the summer. The extract here concentrates on the military aspects of his career and serves as an obituary to a gallant old Tiger who we will always remember and will miss greatly.

.The Tidy (Military) Years – in his own words

I sat the examination for the Oxford School Certificate in June 1939 soon after my 16th birthday in April, but before I got the results the Second World War was declared and I went off to Plymouth to join the Royal Air Force, saying I was 18 (the minimum age for entry) as a Royal Navy  Petty Officer had told me the RAF did not ask for birth certificates but the Navy did! In the event I was sent on Deferred Service and was not embodied until 1940. In the meantime I read law with a solicitor friend of my father with a view to becoming an articled clerk and at the same time guarded four miles of Cornish cliff, at first with a pick handle and then an ancient rifle and five rounds. I wore the uniform of the Local Defence Volunteers (LDV) with an armband denoting that fact whilst the cap badge I wore was that of the Duke of Cornwall’s Light Infantry (DCLI). The LDV later became the Home Guard (HG).

When finally I got into RAF uniform I had one of the biggest disappointments of my life as my eyesight was discovered to be deficient and my training was changed from that of pilot to that of wireless operator (W/Op). In retrospect I think the doctors were correct as I would almost certainly have been shot down easily with defective sight and would have endangered those flying with me. Fortunately at the end of my training, after a further High Frequency Direction Finding (HF/DF) course, I was posted to the Operations Room at a Fighter Command sector station in 10 Group at Portreath in Cornwall. Here I flew in my first RAF twin-engined aircraft, the Wellington. Although it was a fighter station with Spitfires and Beaufighters at a satellite, Wellingtons were being sent to the Middle East via Portreath and in this way I was able to fly in that aircraft.

In January 1942 I followed the Wellingtons to the Middle East, sailing in His Majesty’s Troopship (HMT) Mooltan via Freetown and Durban where we were given a wonderful welcome by the South African families. I determined that I would return one day and I did so 25 years later. From there I went to Port Tewfik in Egypt (in the New Amsterdam to give her the Dutch name in English). From there to Kasfareet, then to Helwan, on to Zerka (in Trans-Jordan) attached to the Trans-Jordan Frontier Force (TJFF) for signals duties and then on to Ramat David in Palestine (now Israel) to join 74 Squadron. After a distinguished performance in the Battle of Britain the squadron was without aircraft and the ground staff were servicing the first American B-24 Liberator bombers of the 98th Heavy Bombardment Group (HBG). I was to assist in running the signals. The squadron’s pilots had no aircraft of their own (they had been lost at sea en route to the Middle East) and were in the Western Desert flying in a combined 145/74 Squadron with 145’s aircraft. We moved from Ramat David to Hadera and then on to Teheran in Persia (now Iran). Hopefully we thought we would get brand new Spitfires. They duly arrived but were given to the Russians and we got clapped-out old Hurricanes instaed!

In April 1943 74 went to Shaibah in Iraq and I was posted to Sharjah in Trucial Oman at the end of the Persian Gulf. Here I managed to fly as often as possible in the Blenheims of 244 Squadron and one, O for Orange, serial BA 437, sank U-boat U-533, the only one sunk in that area, at map reference 28.28N, 56.50E. Her call sign was L5BO and I had flown in her the day before. It is ironic that the Ministry of Defence states now that service at Sharjah did not count for the award of the 1939-4 Star as it was not an operational area! Just how one sinks a U-boat without being operational is not clear. We moved to Masirah Island with ‘stickleback’ Wellington XIIIs, so-called because of the three aerials on the spine. Thence I flew to Aden in a Lockheed Hudson on my 21st birthday on 17th April 1944. In January 1945 I returned to England in HMT The Duchess of Richmond (known to the troops as ‘the drunken duchess’ because she rolled so much) arriving in February 1945 and being posted to RAF Haverfordwest in West Wales with hundreds of redundant aircrew. I was engaged on HF/DF duties mainly doing QGH (letdown  through cloud) exercises.

I was posted in August 1945 to Mount Batten near Plymouth for HF/DF duty with the Sunderlands of 10 (RAAF) Squadron. They had already sunk six U-boats and their flying boats were wonderful aircraft. I was back with Mosquitoes again at RAF Chivenor on detachment for a while and then back to Mount Batten before being demobilised in the old Wembley Stadium on May 23rd 1946.

I decided to return to the RAF in 1962 as an Education Officer on a 16-year-commission. I was given the rank of Flying Officer by virtue of my qualifications and previous RAF service and was promoted to Flight Lieutenant in 1963. I was promoted again to Squadron Leader in 1965 but in November came the Rhodesian Unilateral Declaration of Independence (UDI). I did not want to run the risk of being posted there with a Hunter squadron as had been mooted so I retired without pension in July 1966 and went to South Africa to work for African Explosives and Chemical Industries as an Education Officer. I became editor of the South African Military History Society Journal and Curator of Aviation for some time and was asked to become a Professional Officer at the Museum. In 1980 I was served on the border as a Major in the South African Air Force Citizen Force in which post I had been commissioned in 1977.

The Tidy years have seen their ups and downs but I have lived a wonderfully full life – and as Edith Piaf sings non, je regrette rien and Frank Sinatra I did it my way.