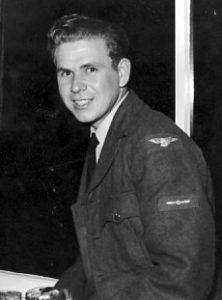 Derek Roy Barnes, known to all as Roy, served as an armourer with 74 from July 1951 to August 1952. Roy completed his trade training at RAF Kirkham and his first posting was to Cranwell. He was delighted when he then joined 74 at Horsham St Faith as his home was just outside Norwich, not that he could take advantage of that too much to begin with as the squadron was busily involved in a series of exercises. From his time with the Tigers Roy remembered in particular the NCO in charge of his section, a Sgt Farman, who ‘knew what he was doing and more importantly he knew what the rest of us should be doing. Under him we never missed a meal, leave or anything else and, more importantly, when air firing was taking place the stoppage rate went up from 250 rounds to over 9,000.’

After 74, Roy moved to 11 Squadron and their Vampires and Venoms at Wunstorff in Germany.

In the early forties, when Roy was still just a lad, he had the idea of propelling a sledge by forcing air beneath it and drawing it out to escape at the back, lifting and propelling the sledge forward.  When Christopher Cockerell patented the hovercraft in 1955 Roy thought ‘that’s my sledge!’ In 1969, remembering his earlier ideas, Roy began making models of hovercraft – some worked and some didn’t.  In 1970 he built his first single seater ready for the Thames Race.  The craft was without a skirt and worked well on grass or water but when hitting the wake of a steamer during the race the bows smashed.  Only a couple of craft managed to finish the race. This proved to be the beginning of a quest to design and build a unique light hovercraft.  He attended many rallies both in the UK and Europe. Most participants at these rallies had their problems but Roy in particular seemed to have more than his fair share.  In recognition of this, in 1974 he was awarded a special ‘Gremlin’ award for ‘persistently overcoming nearly all obstacles!’ Nevertheless, despite the setbacks Roy’s craft was continually being developed and perfected until in 1991 he received an award for the ‘most elegant’ craft which then went on to capture the world speed record for light hovercraft. 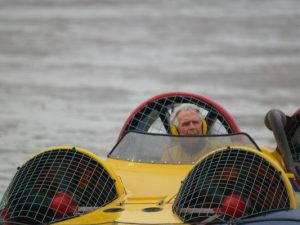 Very often he would fly his craft (hovercraft are flown as opposed to sailed) in just a pair of shorts. Seen from a distance he would appear as if naked and so his craft then became known as Streaker.

Air Lubri-Cat (the craft’s correct name) is currently exhibited in the museum of hovercraft just outside Plymouth.  Roy continued to fly well into his retirement, winning a race at Hunstanton in 2001 against much younger competitors and coming third in 2004, aged 72.

Roy sadly died on the 9th July. Our thoughts are with his family.