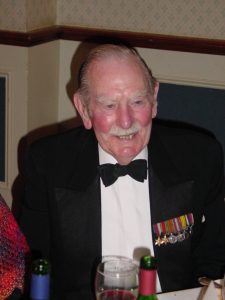 Derek Morris has been an ever present at squadron reunions and we missed him very much this year as he had died on Saturday 5thMarch, just a week before we all gathered at the Royal Court Hotel .

Derek had led a full and varied life in the RAF, starting as a Halton apprentice in 1937 and serving in England, India and Burma during the war years. Post war he was commissioned and didn’t retire until 1977 as a Flight Lieutenant, having given a remarkable forty years to the service he loved. He continued his links with many of the squadrons and units he had served with until the end of his life by attending reunions and anniversary celebrations and by his constant support of all things RAF in a wider context. Living in Lyminge in Kent he was always a supporter of the Capel le Ferne memorial. Away from the RAF, he became verger of Dover Castle church until 1987.

Those of us who have been privileged to know Derek will remember him as a true gentleman with a fund stories about his varied RAF career. He was an historians dream come true because of the detail with which he answered any question. I know from personal experience (writes Bob Cossey) that as far as research into the early wartime years of 74 was concerned, Derek was the man to ask. He was an armourer on the squadron and recalled Malan, Freeborn, Mungo Park et al with great clarity. And he never forgot them. In 2005 when we as an Association commemorated the life of John Colin Mungo Park at his graveside at Adinkerke in Belgium, Derek was there to pay his respects and to tell us about the man as he remembered him.

Such was Derek’s long, varied and interesting career it is worth listing here his service record (as he described it to me) which in itself serves as a fine testimonial and memorial to him.

As an armourer in the early part of his career, it perhaps should be no surprise that Derek was a very good rifle and pistol shot and after he left the RAF he continued to shoot with the Folkestone Rifle Club for many years. In the RAF he represented Fighter, Maintenance, Strike, Middle East and Far East Commands as well as RAF Germany. And in 1960, rifle shooting at Bisley, he became Fighter Command’s Individual Champion.

Our thoughts and condolences go to his children Diana, Richard and Tim and their families.

RIP Derek. A fine old Tiger and a true gentleman.