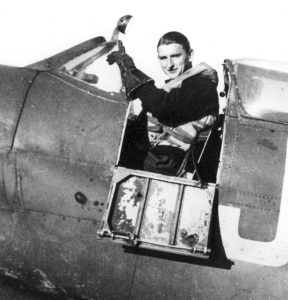 Sqn Ldr Christopher Horn MBE died on September 9th aged 89. Chris was a wartime pilot who flew Spitfires with 74 as part of the 2nd Tactical Air Force in support of the 21st Army group as it advanced through Belgium, Holland and into Germany in 1945. The squadron’s sorties at that time consisted of ground attack, bomber escort and high cover for army operations. This was made more difficult by the waves of V1 and V2 missiles targeting Antwerp and the squadron’s base at Duerne at the time. Heavy flak was another immediate hazard. Although hit twice during this period, Chris flew continuous missions through to May 1945. One incident occurred at Zutphen whilst investigating a slow moving bus. Having descended to 100 feet he was hit by 30mm fire. Shortly after VE day whilst on home leave he met a German POW who was helping his parents in the garden.  The German had been captured near Zutphen where he was an anti-aircraft gunner on the decoy bus!

Some hazards were not expected. Returning home one day, short of fuel and having to observe strict radio silence, Chris found himself under attack by a Mustang pilot who, perhaps because of the Spitfire’s clipped wing configuration, had failed to recognise his type and markings. Only on the verge of counter-attack did word get through – the American waved his wings and disappeared.

Christopher Horn was born in Ashington, Northumberland on April 6th 1921 and was educated at Morpeth Grammar School. He trained as a pilot in the USA as part of the Arnold scheme and received his wings in Selma, Alabama in February 1943. Returning to the UK he was posted to 57 Spitfire OTU (in one of whose Spitfires he is pictured) and thence to 74 Squadron. Leaving the RAF in 1946 he studied civil engineering at the University of Durham, but flying was everything to him and he rejoined the RAF in 1949 to become an instructor at Central Flying School. Life at CFS was not without incident either – on one occasion in 1953, having climbed through dense cloud to 27,000 feet in a Vampire T.11, the accompanying student accidentally turned off the fuel supply which turned the Vampire into a heavy, unstable glider. Ejection was not an option with the villages of Oxfordshire and Gloucestershire underneath into which the abandoned aircraft could have crashed. Although the cockpit iced over Chris, flying solely on instruments, force landed the aircraft at Brize Norton. Both occupants walked away unharmed and calmly bade the ‘welcome’ party good afternoon!

In 1956 Chris Horn created the persona of Wing Commander Spry which many of you will remember. The idea was that Wg Co Spry would help, with humour, to concentrate the minds of pilots flying ever more complex jets on safety. The needs for strict discipline and effective instrument training were a constant factor in Spry’s tips and clues.

In February 1964 Christopher Horn was made an MBE. Then, no longer able to fly and instruct, he left the RAF in 1968 and worked independently to support RAF staff with their insurance needs. In this capacity he made many more long standing friendships with RAF personnel all over the country. The last years of his working life were spent with Austin Reed, the retail chain, based in Thirsk, North Yorkshire. Though notably independent and individual, Christopher Horn particularly enjoyed involvement in his local community, Dishforth, where he lived for 42 years.

With thanks to Christopher Horn’s son Michael.