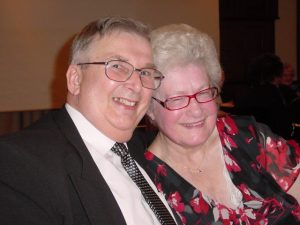 It is with sadness we have to tell of the death of Chris Stott (seen here with his wife Evelyn) in the early hours of 17th  July. Chris was a Tengah Tiger serving with the squadron from April 1969 until September 1971, holding the rank of Chief Tech when he was posted out to 30 MU at RAF Sealand. Of his time at Tengah two of the memorable detachments he undertook were those to Darwin in 1969 and Butterworth in 1970. Chris had a long RAF career – 23½ years in total. He joined as a Boy Entrant at Cosford  in February 1954 after which his first posting was to Leconfield in August 1955. Over the ensuing years he found himself at Boscombe Down, Coltishall, Wattisham, Tengah, Sealand, Bruggen and back at Sealand again where he was demobbed in September 1977. He joined the Association in 2009 and  we were so pleased that he and Evelyn subsequently attended a couple of reunions. Our thoughts are with her.