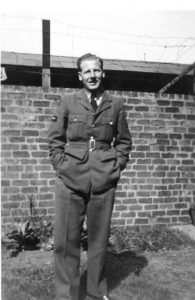 We sadly have to record the death of Charles Godwin of Horton Heath, Eastleigh, who died on November 13th  aged 93. Charles was a Tiger between October 13th 1940 and September 11th 1941 and so would have been with the squadron at Biggin Hill, Manston, Gravesend, Acklington and Llanbedr. He was a Fitter IIE with the rank of Corporal whilst with 74.

Charles is one of the very courageous band of men who fought for their country during those terrible times of the 1939 – 1945. The fact that they belonged to squadrons such as 74 where the ‘esprit de corps’ and camaraderie was so tangible was very important to them as individuals and played a large part in helping them to cope with the situation into which they had been thrust. That is reflected I think in their pride in the Squadron and the Association. We are proud to have had them as members.

Our thoughts are with Charles’ family.