Bill Medland died peacefully in hospital also on the 25th April. His funeral was held a week later at Gloucester Crematorium. Our thoughts are with Di and their daughters as they adjust to a life without Bill and his ever present sense of humour. This stayed with him to the very end and indeed beyond, for those who attended his funeral were played out with Monty Python’s ‘Always Look on the Bright Side’! A lovely touch so typical of the man.

It was very appropriate that Bill`s funeral service was conducted by Dave Smith who was 74`s SEngO at Wattisham. When Dave left the RAF he was ordained and now has a parish in Gloucester not far from Bill and Di`s home.

Di has written the following tribute to her husband.

Bill joined the RAF in 1970 and trained as a navigator.  He left the full time RAF in 2004 and joined the Reserved Forces – same job and same desk. His career began as nav radar on Vulcans (50 Sqn and OCU) from 1972 to 1978. In 1975 he was a member of the Vulcan display team. Bill then moved to F4s until 1992 (23 Sqn at Wattisham, OCU at Coningsby, 19 Sqn at Wildenrath and 74 Sqn back at Wattisham). He had two 4 month tours in the Falklands – one flying and one as Sqn Ldr Ops. He next joined the F3 OCU at Coningsby running the ground school and all the sims. We were then posted to Farnborough for 3 years with DERA.  In 1999 we came to Innsworth, working for a short time with Reserve Forces and then joined the Flying Training HQ where he looked after NFTC (NATO Flying Training in Canada) and then the rear crew aspect of UK MFTS (Military Flying Training System) – the replacement for the current system. During his time at Innsworth he was heavily involved in setting up the NFTC in Canada. 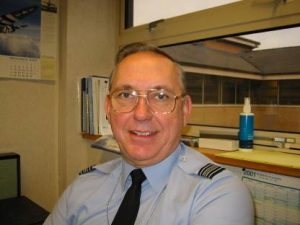 Bill and I met at RAF Scampton where I was a Catering Officer. We married in 1974 and have two daughters of whom we are extremely proud.  We bought our house, in Cheltenham, in 2001 and have settled very happily here, joining the local Golf Club and making a lot of friends.  Living in Cheltenham has meant that we were able to travel easily and keep in touch with family and friends old and new.  I intend to stay in Cheltenham

Every one I have talked to speaks of the respect that they had for Bill and how professional he was in all posts that he was given, how he was a true and loyal friend and always ready to help anyone at any time. He was an excellent instructor and often helped students who needed that extra bit of confidence. He had a great sense of humour and enjoyed sending on the many emails he received from friends and family. Whenever he went to Cyprus he enjoyed taking Lady Heather (the RAF Boat) out sailing. His hobbies in the last few years were golf and model aircraft flying.  In fact he encouraged me to take golf up in 2000 so that we could enjoy travelling the world, playing golf, during our retirement.  We did manage to play in Sun City in South Africa, Spain and the USA during our holidays. He was very proud of his Welsh ancestry – indeed the Welsh flag draped his coffin at his funeral.

Bill was diagnosed with bowel cancer in 2005 and remained positive and cheerful, despite having 18 months of chemotherapy. Everyone who met him admired his strength of character and he managed to play golf until October 2007 (even beating me on occasions!) This was a great help in his battle against the cancer.  His oncologist would judge his fitness for the next round of chemotherapy by how many holes of golf he had played.

The esteem in which Bill was held has been shown by the number of cards I have received and the attendance at his funeral – all a great comfort to me – and the donations received for Cancer Research UK.  The total stands at £1250 as at 1st August.

I am proud to have been his wife, friend and mother to his daughters.