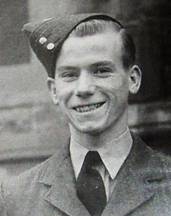 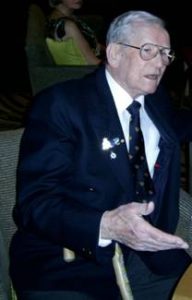 We sadly have to say farewell to Bart Bartholomew who passed away with his family around him on September 10th following a heart attack.  Bart’s funeral was on 30th September at Eltham Crematorium. He was always very proud of his membership of the Association and for his funeral he was dressed in his blazer with its squadron badge and his tiger tie. He was a true gent with an infectious smile and a sense of humour which endured him to everyone – although his jokes were terrible! He will be much missed and our thoughts are with his wife Doris and son and daughter Martin and Bev and their families.

Bart joined 74 Squadron in June 1944 after two and a half years with a Mosquito night fighter squadron. When he arrived 74 were engaged in sweeps across the continent from various locations including Tangmere on the Sussex coast after which they moved to France. Bart and the squadron then moved through Belgium and Holland, ending up at Schijndel where on January 1st 1945 the Luftwaffe had a final fling when they attacked Allied airfields. Schijndel was hit by a squadron of Focke Wulfs. Nevertheless Schijndel proved to be a comfortable billet for 74 after their previous one at Antwerp Duerne, being ex-German barracks with bunk beds. It had been captured by the American 101st Airborne Division – the Screaming Eagles – and handed over to the 2nd Tactical Air Force of which 74 were a component. From Holland the Tigers moved into Germany and made their home at Lingen until the war’s end. That was a euphoric moment but as Bart later wrote:

On reflection I had mixed feelings thinking about the future and the loss of the easy going life and comradeship we had all built up in 74 from the CO to the lowliest AC plonk. I was due for BLA leave and after handing in my Sten and ammo I was adequately sprayed with DDT and sent on my way to a transit camp at Calais.  I arrived home smack in the middle of a street party outside my house where all the neighbours were celebrating VE Day. In the meantime the squadron had returned home, to Colerne in fact, and I had to rejoin them there. We were due to convert to Meteors with a possible journey to the Far East being rumoured. VJ Day arrived however and my RAF career was on the wane. In May 1946 I found myself on my way to Uxbridge and a double breasted pin stripe suit plus a trilby.  On arriving home I gave the hat to my uncle.

I have some wonderful memories of my service – some happy, some traumatic – but looking back I’m glad it all happened and I will never again share such a wonderfully comradely experience as gained by becoming a Tiger.