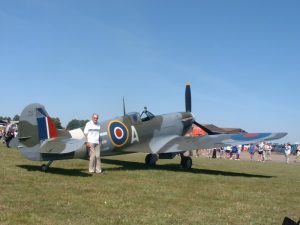 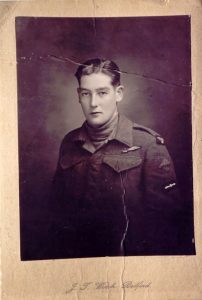 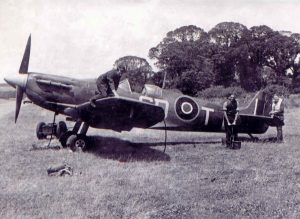 The following Eulogy has been sent in by Robin Ping, son of Aubrey Derrick Ping (Ex Tiger) during the Spitfire era.

It is with regret that I have to inform you of the passing of my father LAC Aubrey Derrick Ping (25 /08/23 – 24/03/09). Dad joined 74 squadron at droppe  in Belgium during April 1945 maintaining Spitfire 16’s. He joined the RAF in 1941 and following training on one of the last FME courses at RAF Cosford ( in future all engine courses were transferred to   Halton) was posted to No 501 squadron maintaining spitfire 5b’s ( one of the aircraft he maintained EP120 still flies with the fighter collection at Duxford so he could not have been to bad as a fitter, however it did crash at one point!). In 1943 dad was posted to 660 AOP squadron servicing the engines of the Auster 3’s & 4’s and also flying on operations as an observer. In  late June he landed in Normandy and 660 took part in the battles of Caen and the Falaise gap. following the push towards Arnhem with 30 corps and  then later the Rhine crossing he was posted to 74. He was given a brief course training on the  welland jet engine but then along with others was given a crash course at Rolls Royce Derby because the meteors were by then fitted with the Derwent. One of the last aircraft dad had a connection with, before he was demobbed was Meteor EE549 when Group Capt Donaldson  raised the airspeed record.

My first memories of 74 were during 1961 when I was taken by my father to see 9 bright silver planes with tiger heads on their tails take off, pull up and go vertically in to the sky. The lightning was and always will be my favourite aircraft( I know it had its faults, very short range, limited armament , pig to maintain, but was it impressive!)   . The last memory I have was when my father was invited to attend one of the last 74 squadron family days at RAF Wattisham  whilst they were still flying the Phantom.