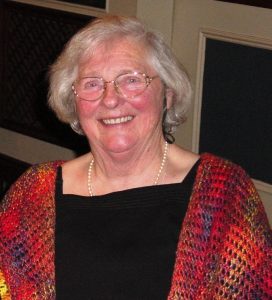 Angela Cordell died in a Yeovil nursing home on 21st October.  Her husband Jim was a Tiger at Gravesend for just seventeen days in the summer of 1941. This was between serving with 54 Squadron (with which squadron he fought at the end of the Battle of Britain) and going to 56 Operational Training Unit at Sutton Bridge. He was later posted to a CAM ship on a convoy to Malta but fortunately didn’t have to be catapulted off. Jim had sadly died by the time that Mike Rigg introduced Angela to us and she was very happy to accept Honorary Membership of the Association in 2005 and she has been an ever present at reunions since. Those of us who got to know her found her to be a lovely lady, a real character and very supportive of the Tigers: she was always very pleased to be involved at reunion time. She was quite remarkable in terms of what she did as she reached her senior years – Mike met her when she enrolled to take lessons at a flying school at Exeter where he was instructing. She was 74 at the time!

RIP Angela. We will all miss you.