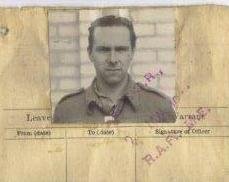 F/Sgt Alex ‘Dave’ Davidson died on 3rd January. He almost made it to 90 years.  Dave was an ardent amateur radio operator with a call sign of GOUVQ. He was also a member of the RAF Radio Society and was very keen on cricket and hockey. He served on 74 Squadron from January 1940 to November 1943, joining as an AC2 and leaving as a Sergeant. Dave was a Wireless Operator Mechanic (WOM).

He spent a total of fifteen years in the RAF, training at the Electrical and Wireless School at Cranwell prior to joining the Tigers. He was posted out to Aden after the war and and back in the UK he found himself at Farnborough (RAE) and Boscombe Down (A&AEE) before returning to the Middle East in 1948, serving at 107 MU at Kasfareet in the Canal Zone. His final year in the RAF was spent at Thorney Island.